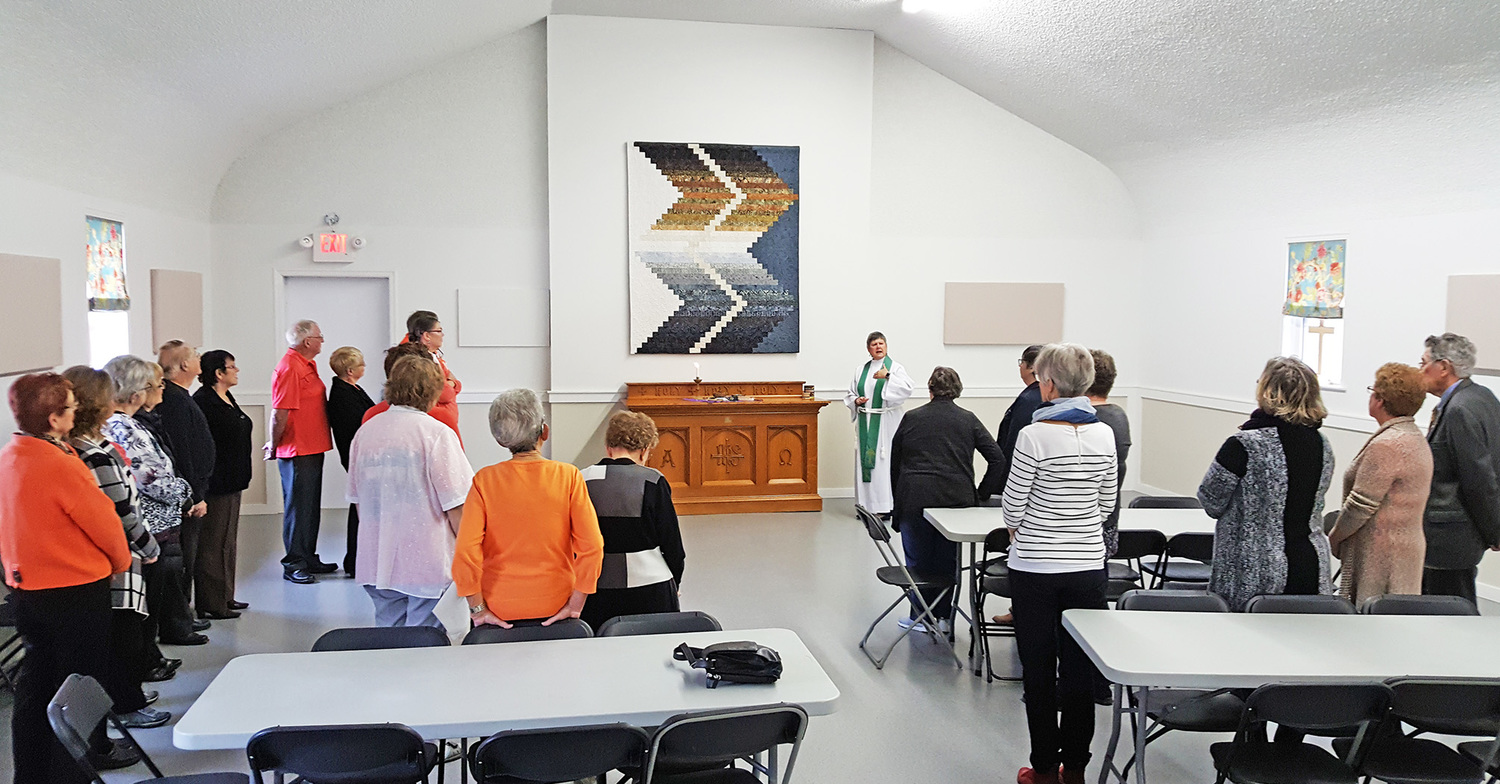 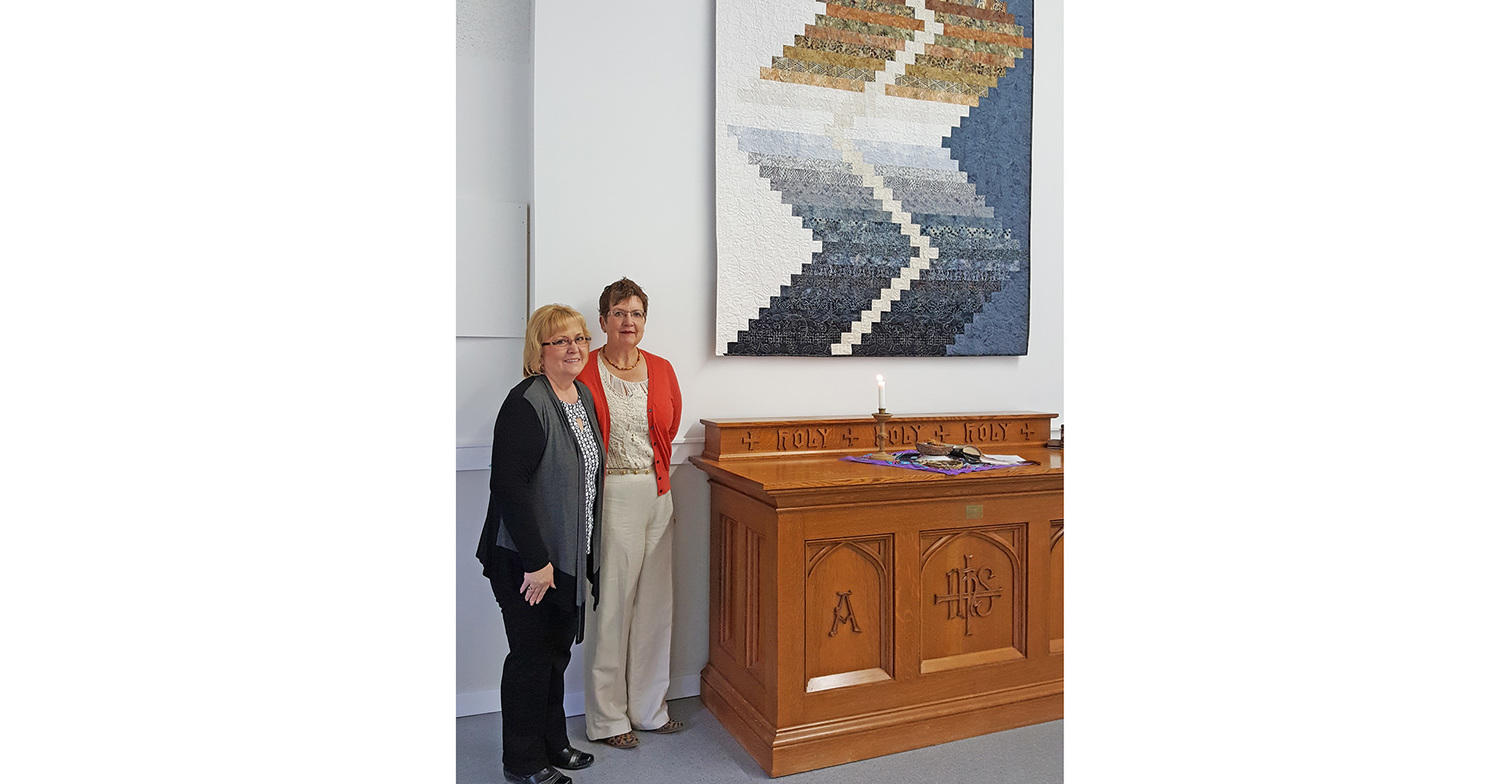 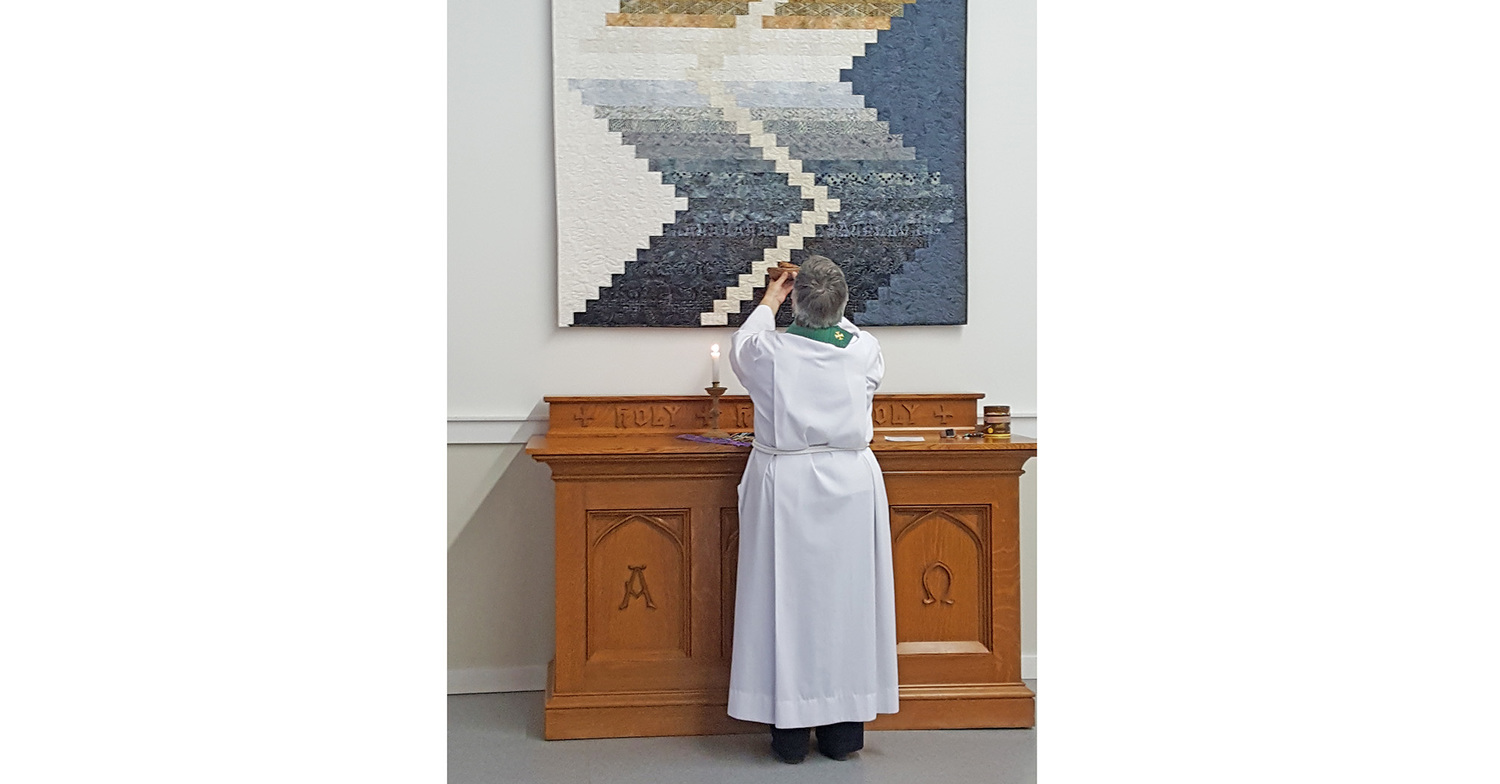 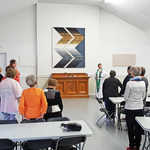 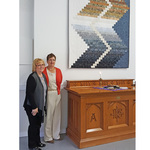 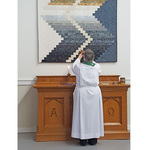 Nearly nine months after the end of Canada’s 150th Celebrations, St. Saviours dedicated their 150th anniversary quilt. The quilt has been hanging in the hall for most of 2018, but this was the first opportunity we have had to officially dedicate it and to reflect on its meaning. This time has allowed for us to take our time to really consider what the purpose of the quilt and what it represents to us as a parish community.

The idea of a quilt began with a very practical purpose, that of providing some decorative sound deadening on the far wall, but as members of the parish took part in the Canada 150th mosaic project the idea of making a quilt as a 150th project began to take shape. With the support of the ACW, Wardens Joann Mones and Judy Misick, we approached Rita Barr with the idea, asking her if she would consider taking the project on. Rita agreed and we began to look for an appropriate pattern. It took some time but we finally discovered the pattern you see now, and Rita began to work on the quilt top.

For those of you who are quilters, you know that as you work with the fabric, some kind of a relationship builds between the quilter and the fabric. Ordinary pieces of material take on meaning, and as the quilt takes shape, ideas and thoughts come into the mind of the quilter. It was at this point that Rita came to recognize that there was something wrong with the original pattern. The pattern we had chosen called for a dark zigzag piece to intersect the quilt right down the middle. She felt that this was too harsh and approached us with the idea of replacing this with some white fabric. We agreed and the pieces were replaced resulting in the quilt you see today.

With the completion of the quilt top, it was time for the quilt to be completed. With a generous donation from Carol Wasylik, owner of Extraordinary Extras Inc., who donated the quilting and the binding, the quilt was finished and with the assistance of Dean Barr, hung in the hall, early in the New Year of 2018.

Over the past few months, I have had many opportunities to reflect on the quilt and have come to recognize the appropriateness of the quilt as a recognition of not only the 150th Anniversary of Canada, but as a means of recognizing and honoring this land we live on. The colors of the quilt are the colors of the land, the blues of the sky, and the water, both on clear and stormy days, the greens, browns and golds are the colors of the grasses, crops, forests and meadows, and the whites reflect the clouds and snows of winter. It is a land that is rich and filled with life and abundance and has provided our ancestors with sustenance and plenty for many generations. It has also been a good land for those who lived here before we came.

The story of the quilt reflects the story of our two peoples, living on this land, yet living apart, truly two solitudes. How appropriate it was that we dedicated this quilt on Orange Shirt Day (which just happened to fall on a Sunday) this year). Thanks to Rita, the two sections of the quilt (which can be seen as representing the two peoples of this land) are not divided by a black line, but by a white strip, the color of openness and room. The white provides a space where something new can be written, a place where the two people can come together in friendship and hope, and together make something new.

And so, we dedicated our quilt to the Glory of God, in thanksgiving for this beautiful and unique land, in a spirit of friendship and hope recognizing that this quilt is more than just a commemoration of 150 years of Canada’s founding, or a way to deaden sound, it is a symbol of hope and healing in our midst.