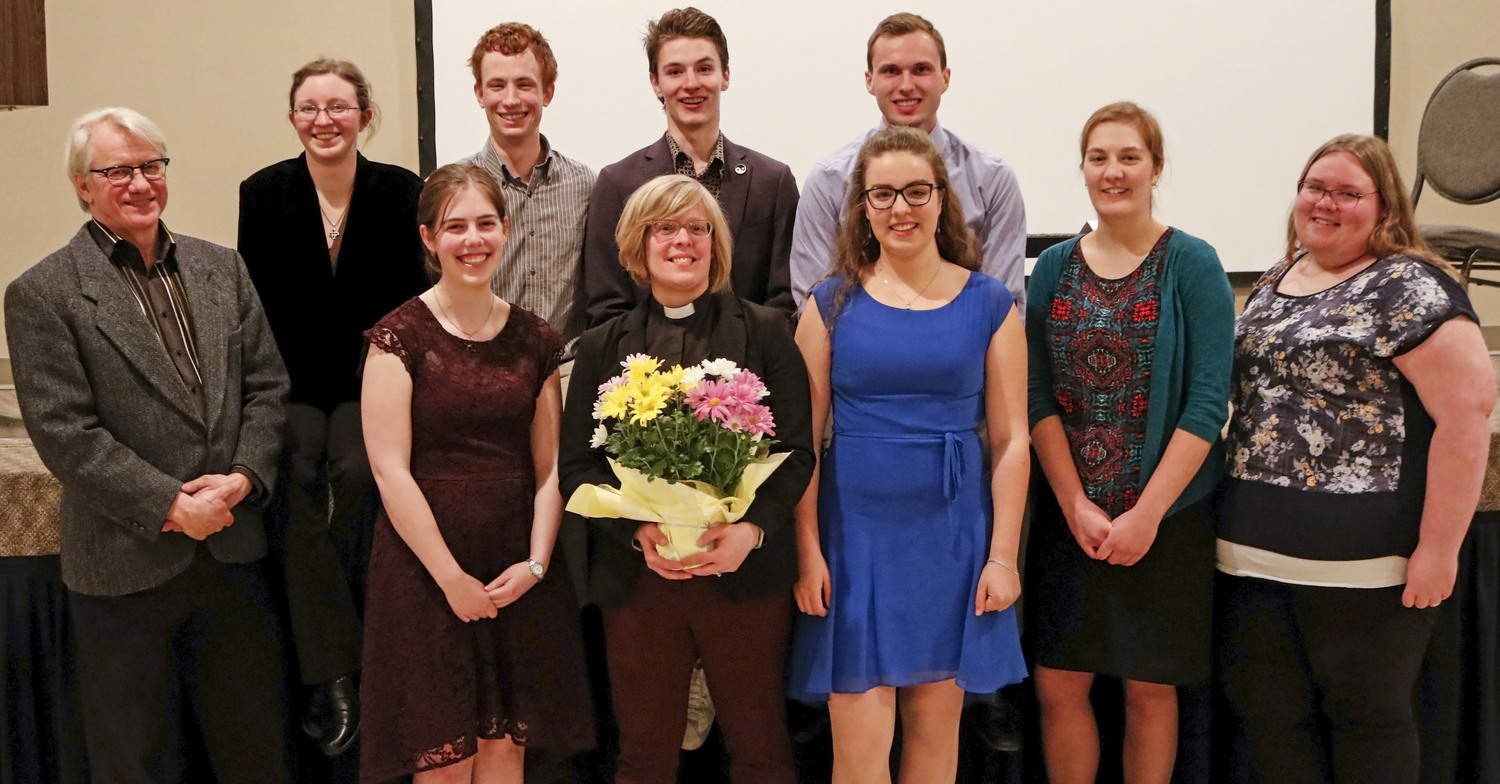 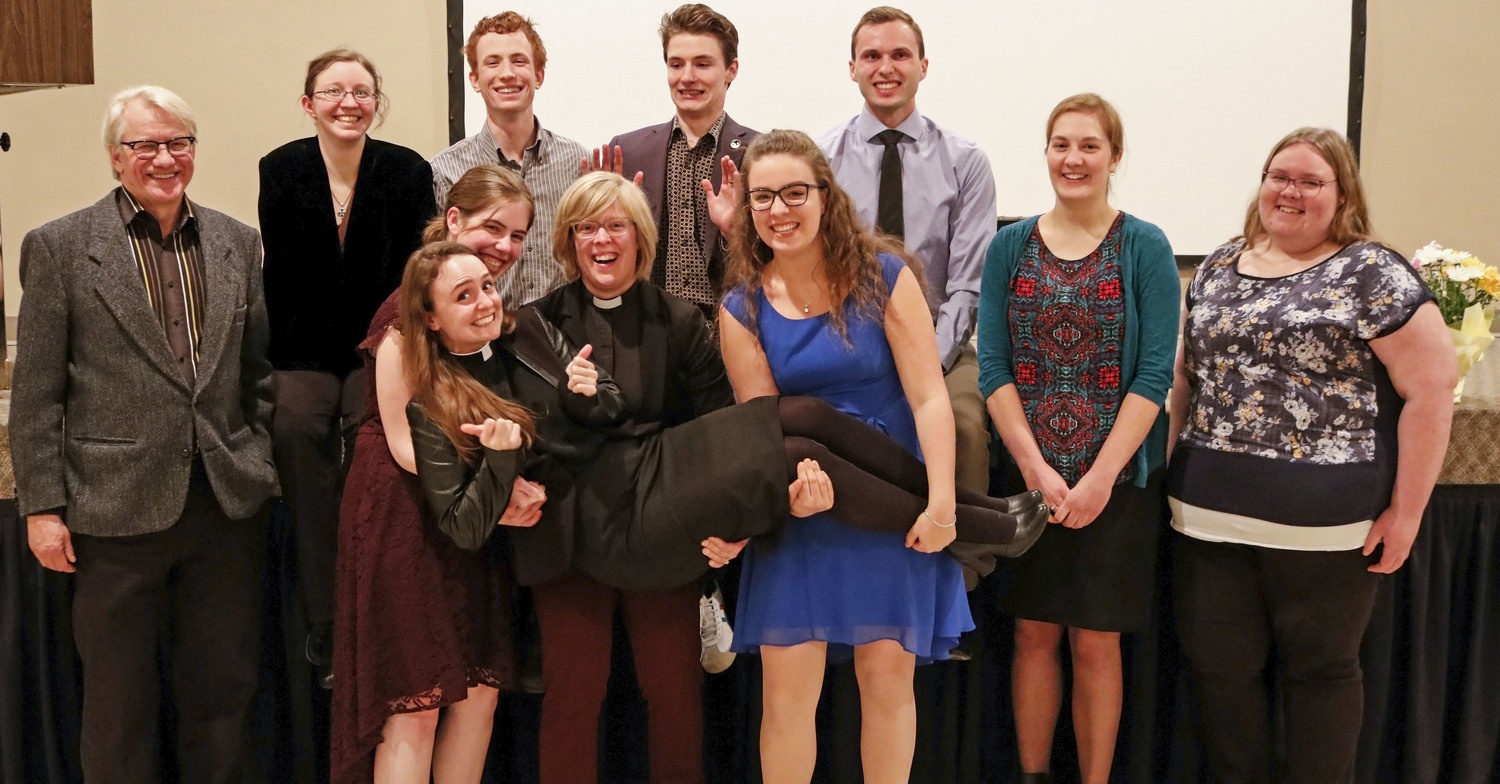 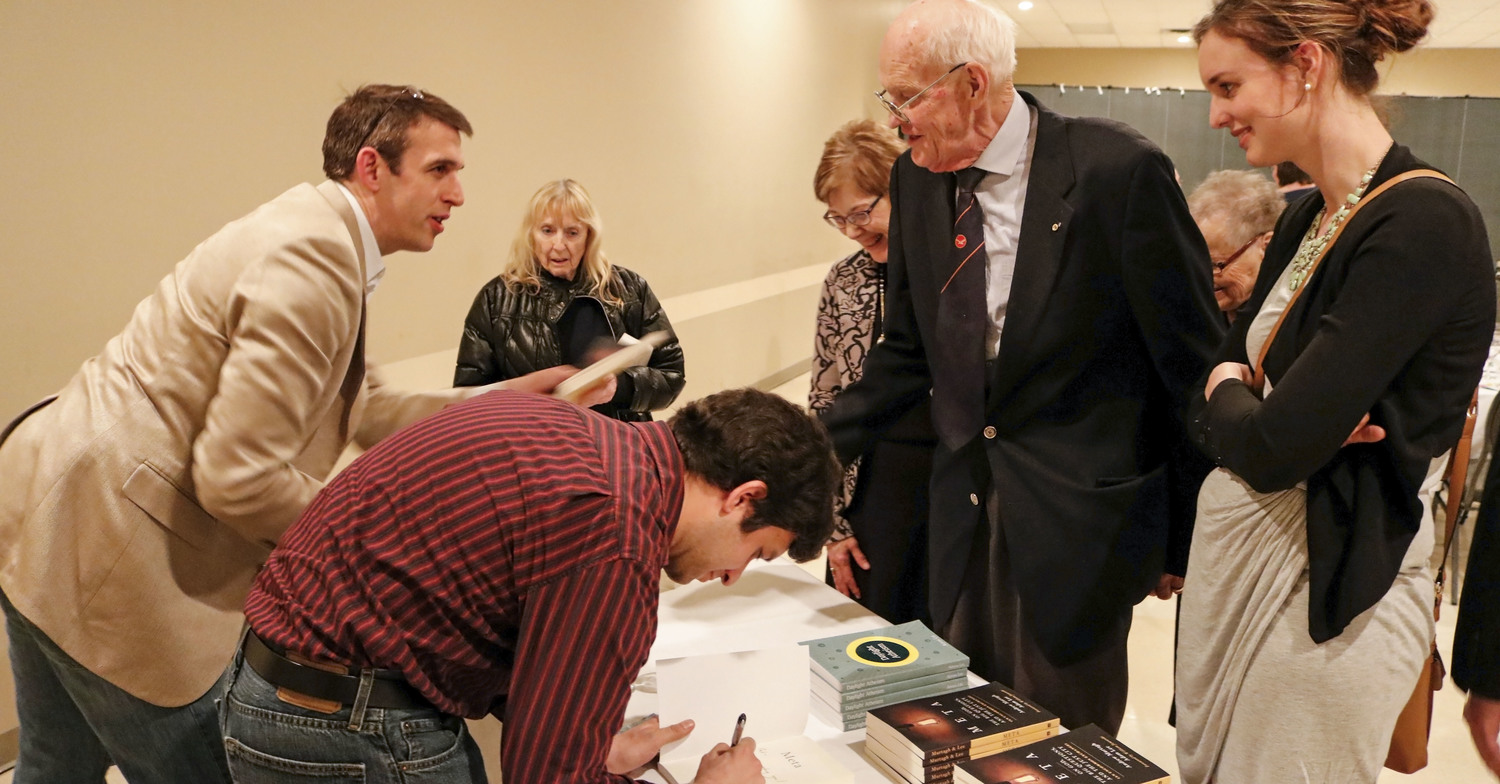 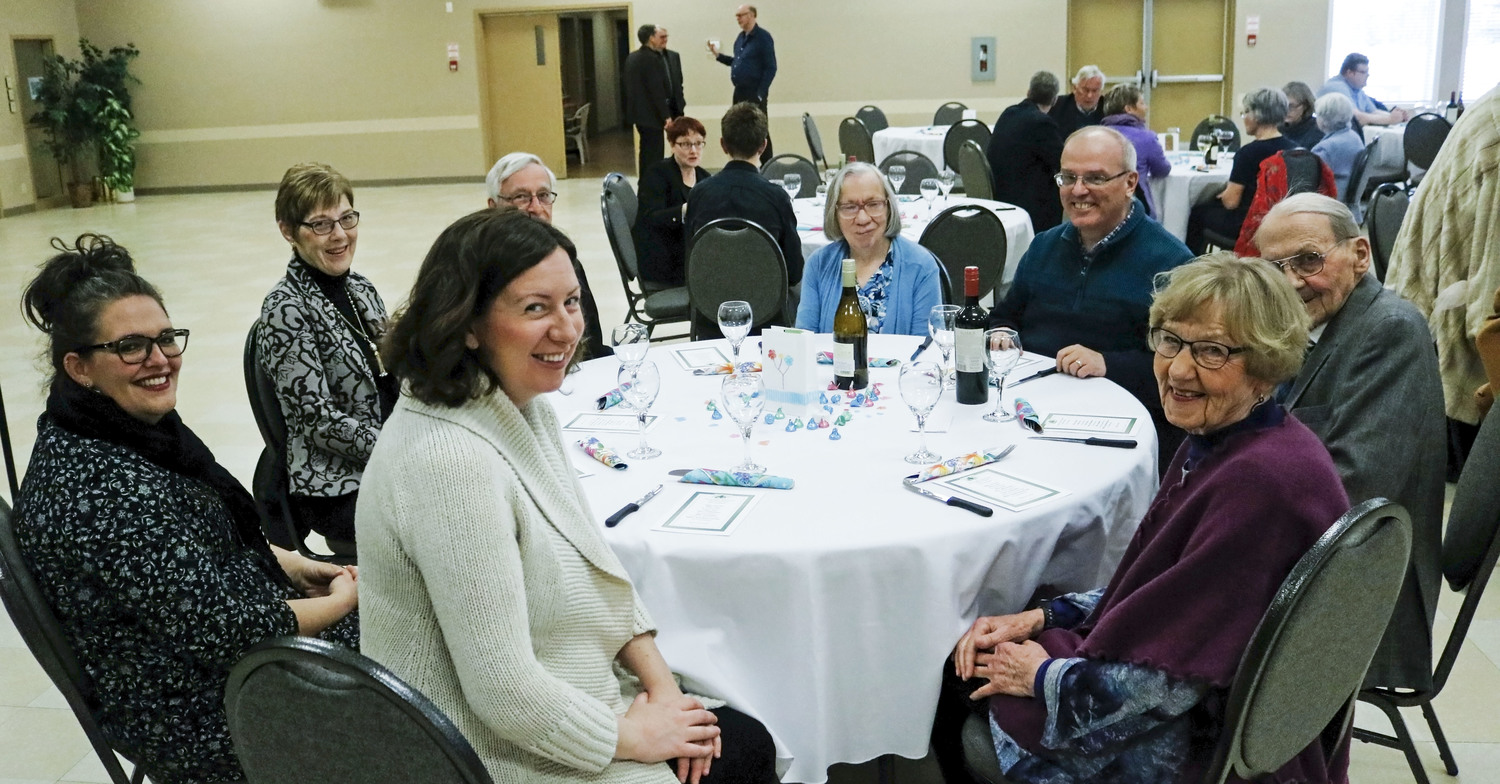 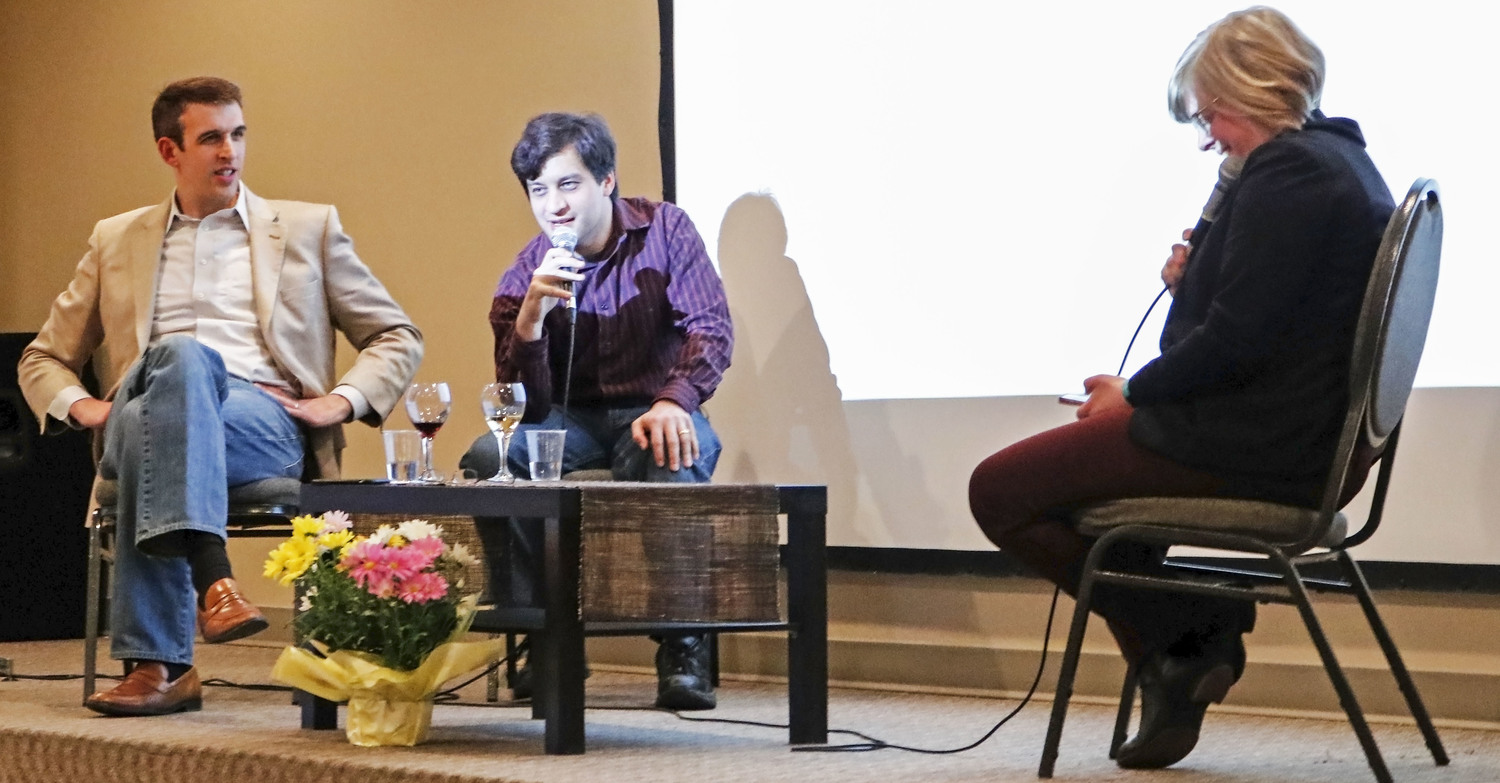 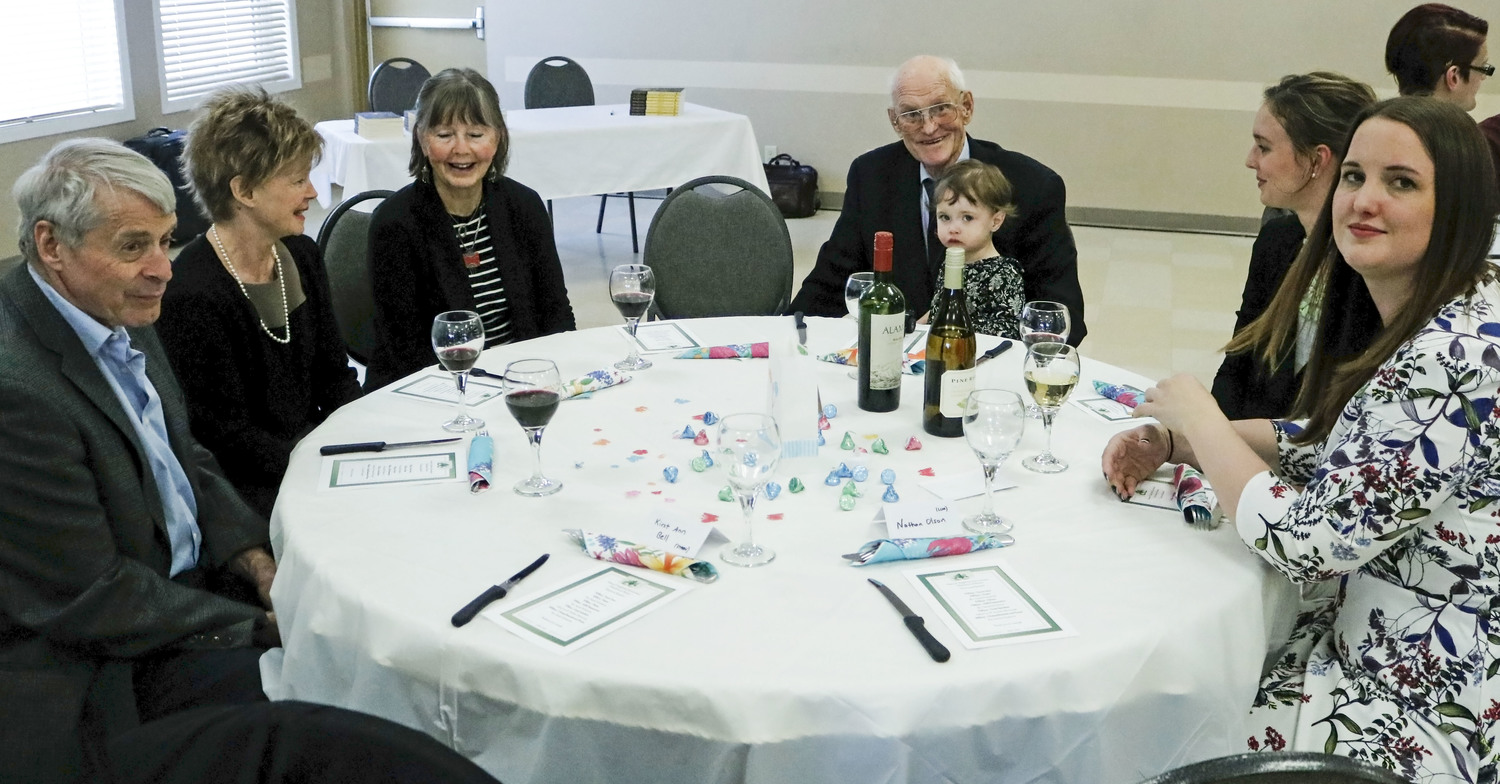 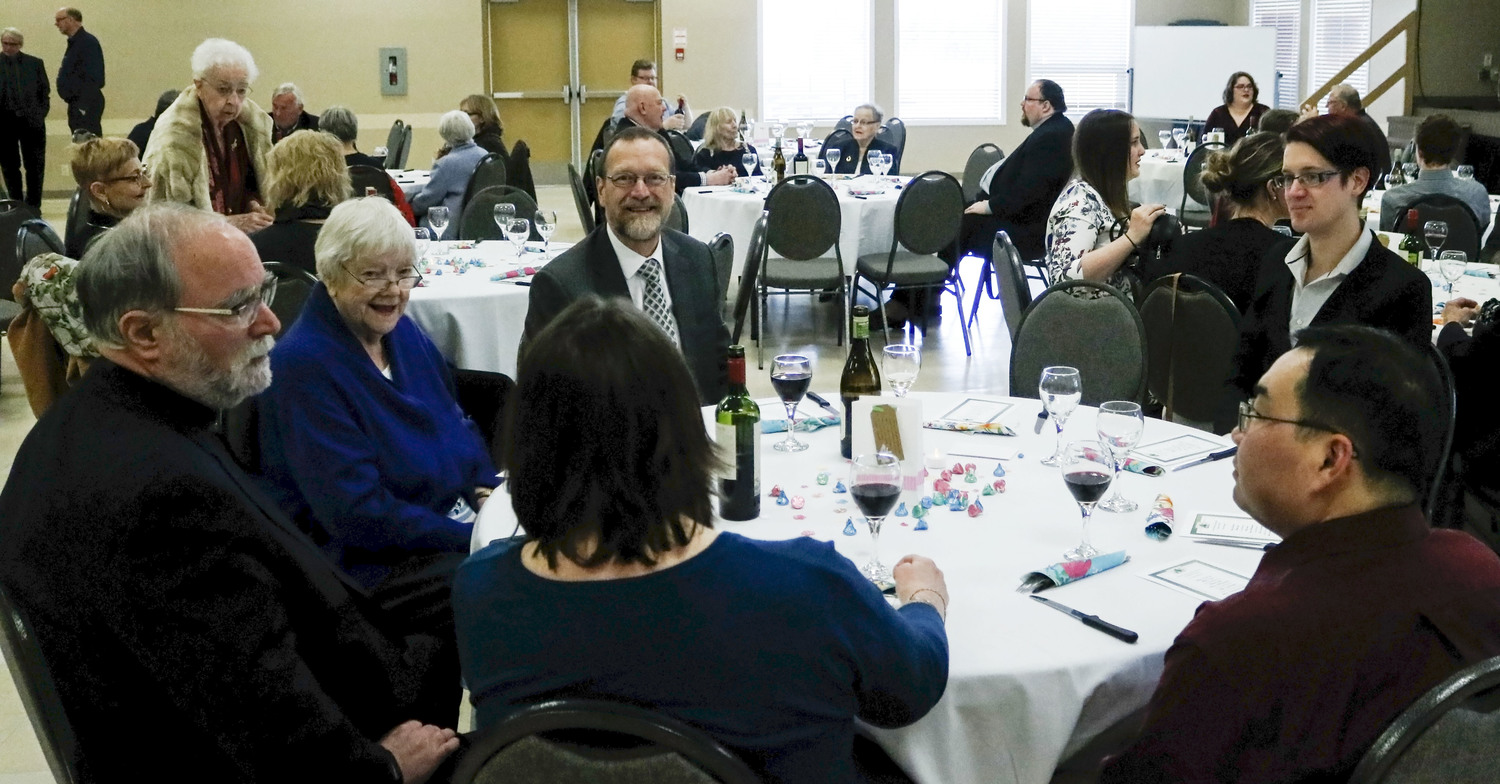 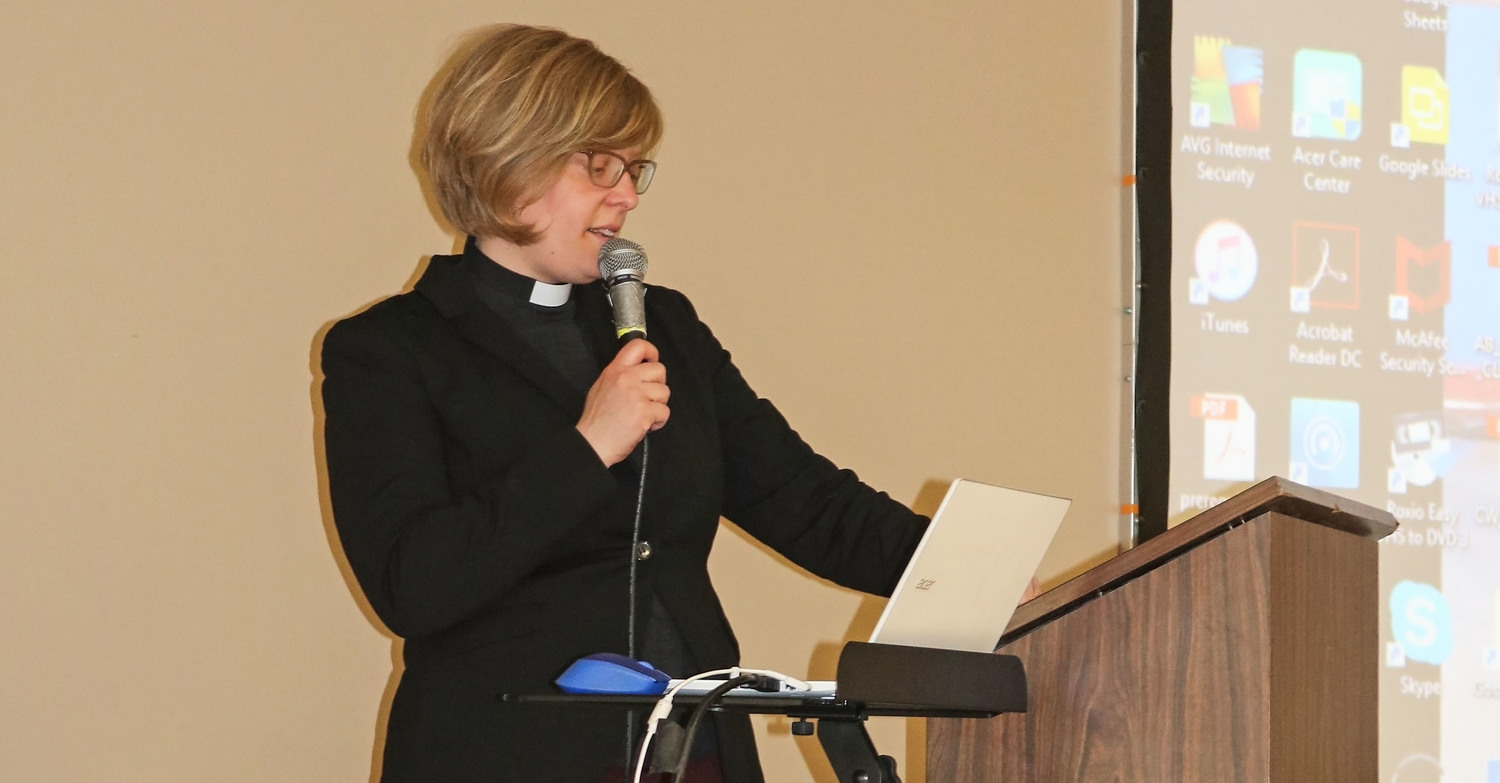 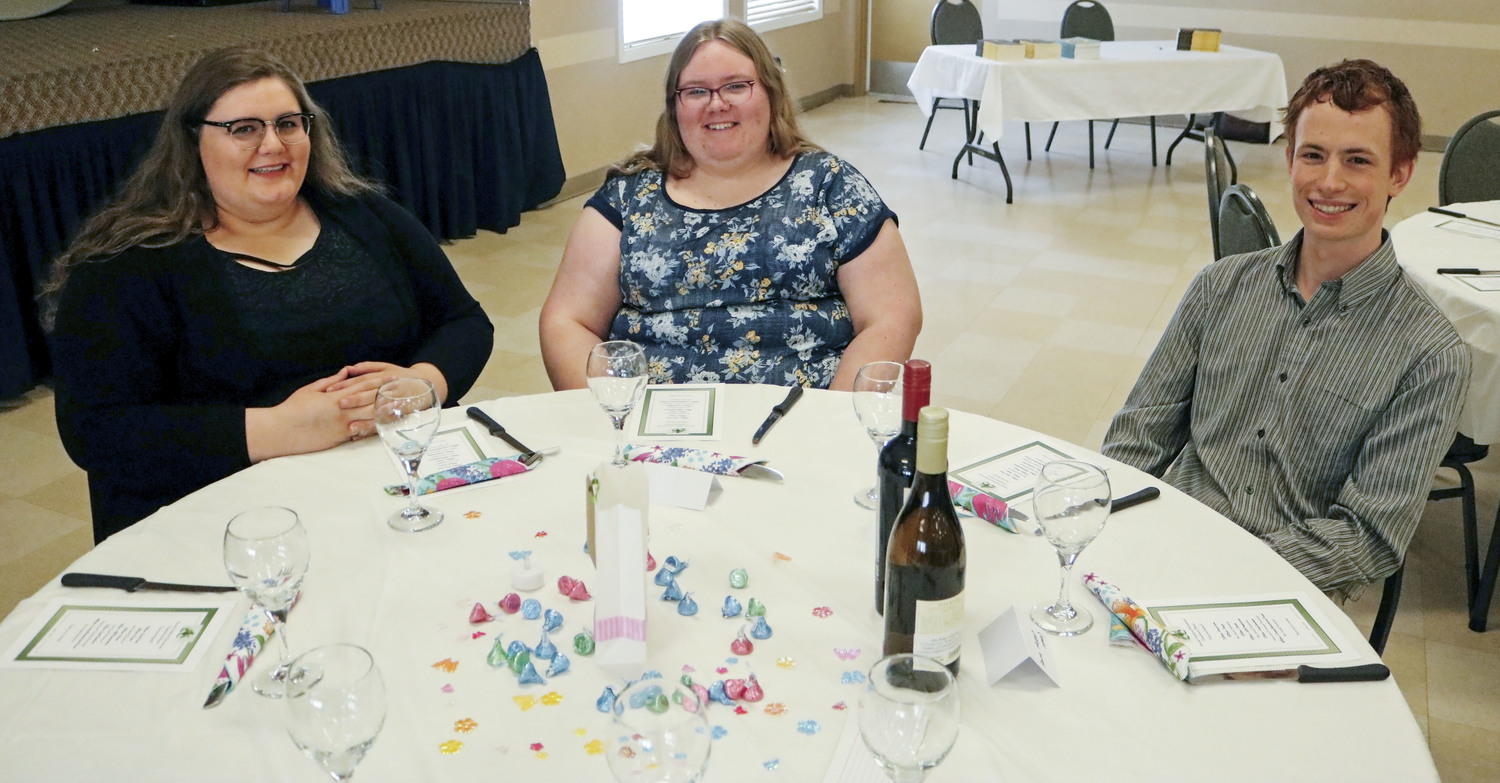 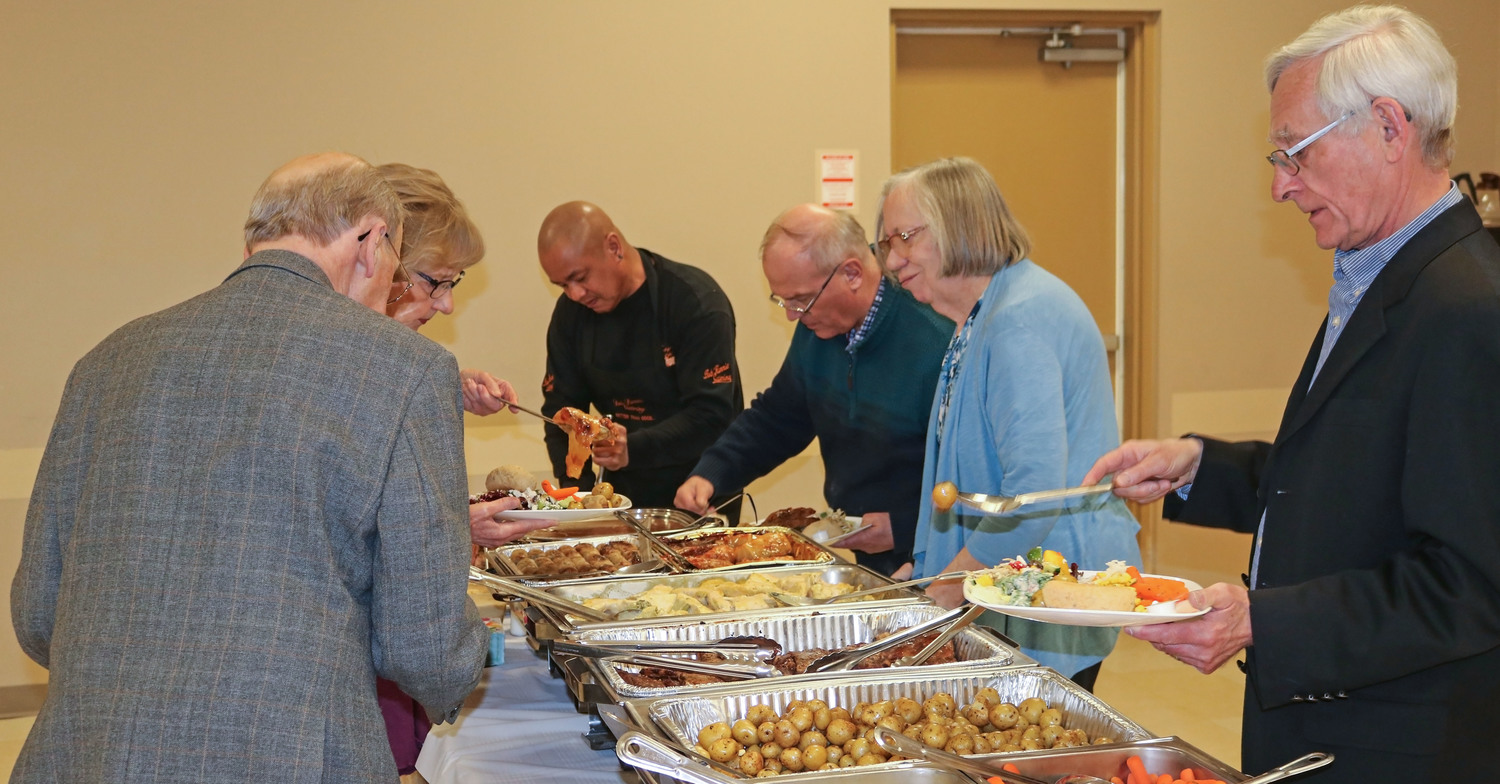 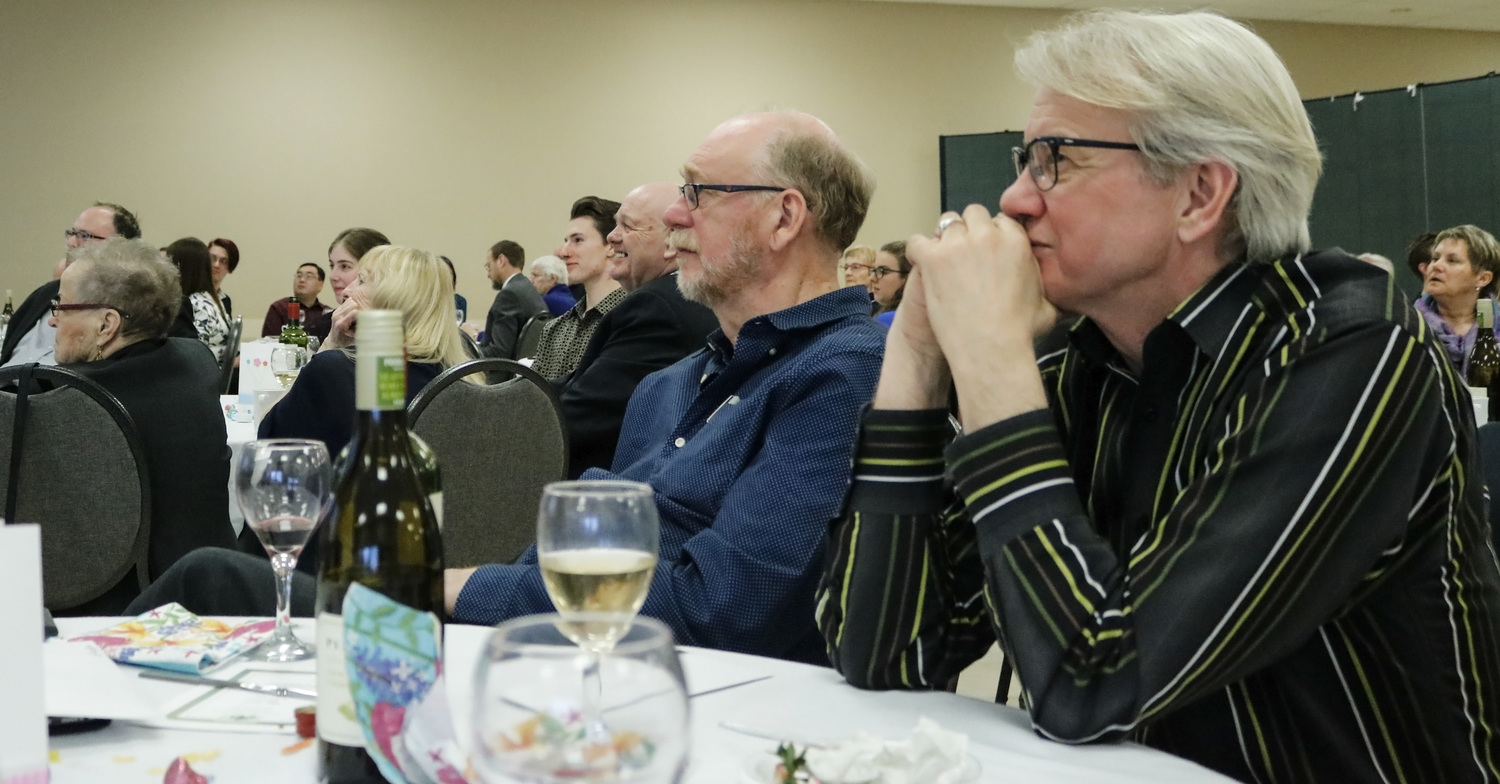 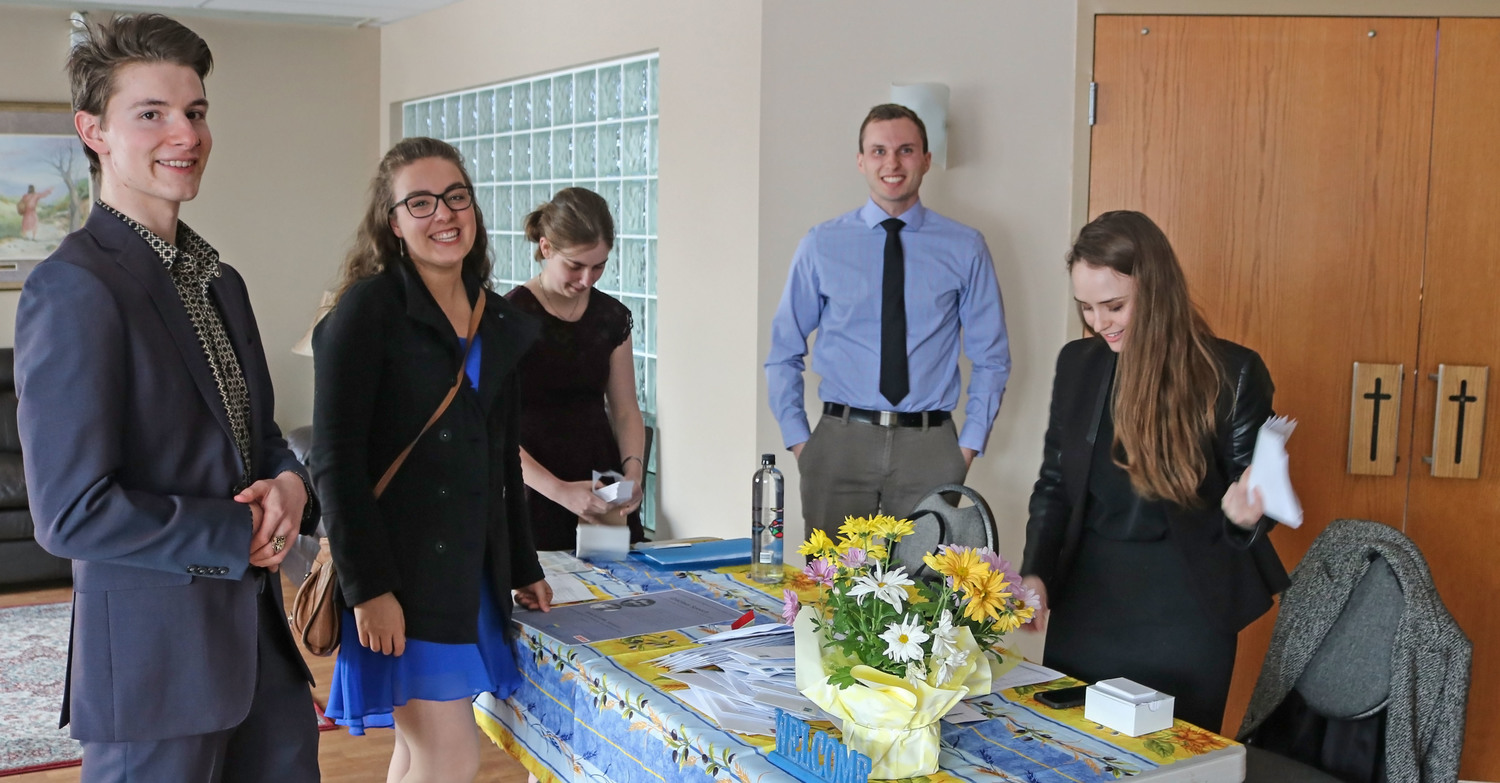 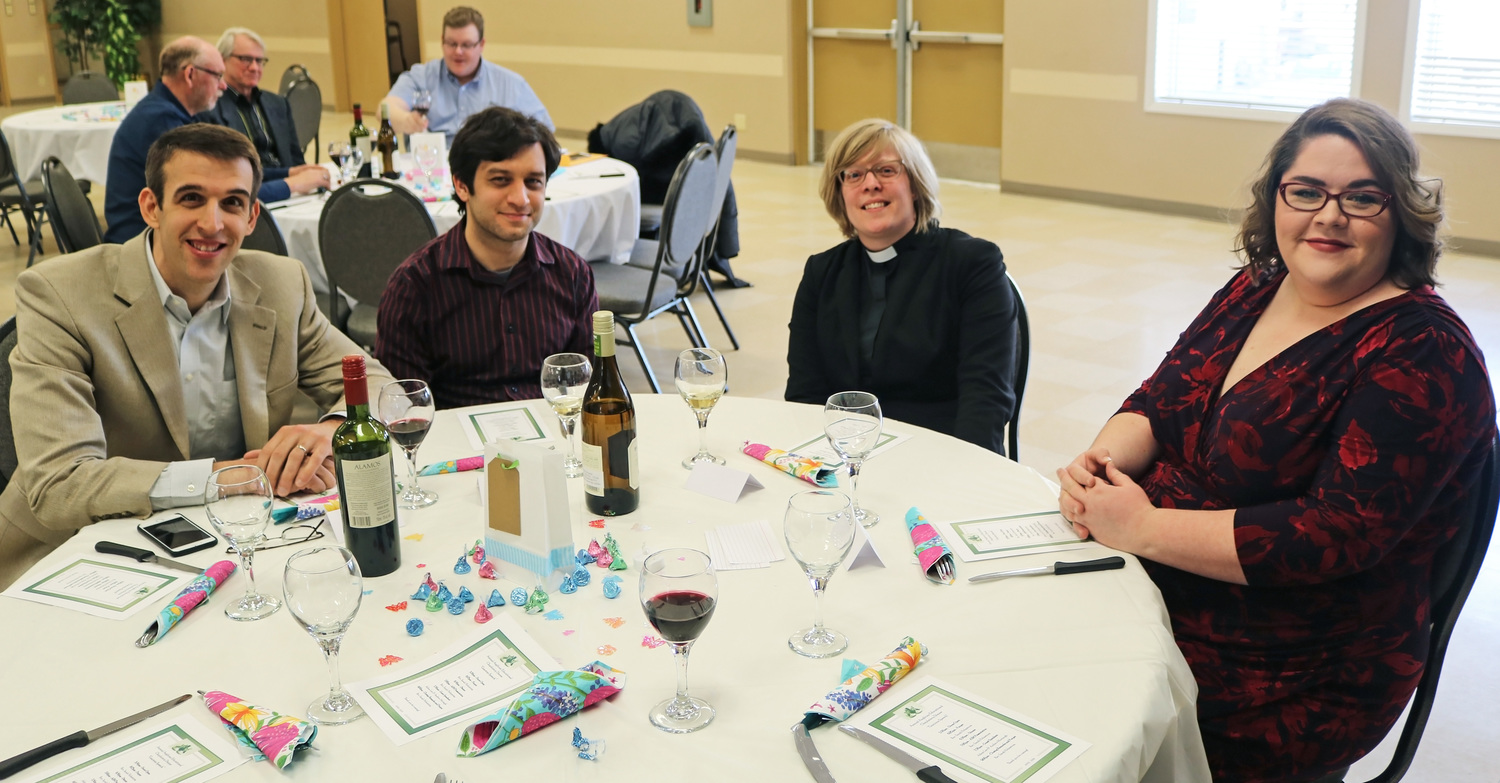 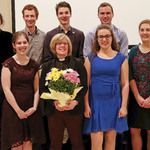 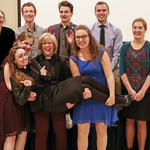 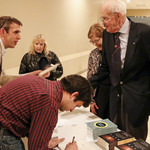 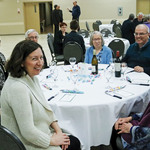 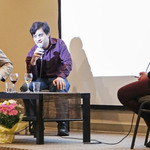 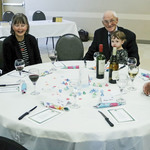 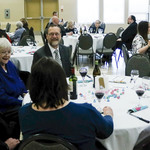 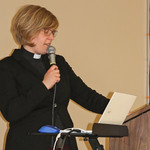 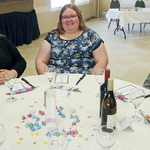 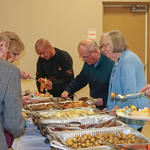 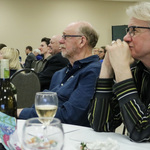 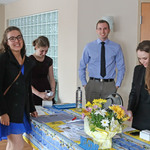 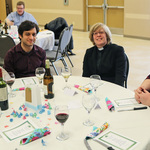 Two friends with a different take on how our world came to be graciously debated some of life’s big questions at the annual fundraising dinner for Anglican Student Ministries on Friday, April 6.

Andrew Murtagh and Adam Lee believe differently about spirituality. Andrew, a biomedical engineer from Indianapolis and currently working in the medtech industry, is a Christian. Adam, a software engineer from New York, is an atheist. Yet, they have developed great respect for one another by focusing not on their differences but, instead, on their commonalities: a quest for knowledge and the common good.

Andrew and Adam even wrote a book together and, as the authors and activists tour the US and Canada (Edmonton was their first destination across the border), to promote Meta: On God, the Big Questions, and the Just City (an Uncommon Exchange), they are also raising awareness for the global epidemic of human trafficking – modern day slavery – and Polaris, a nonprofit organization working to end it. View their video, "Meta 03: Ending Slavery in Our Time."

Before welcoming Andrew and Adam to the stage at St. Matthias Anglican Church for an engaging debate on some of life’s big questions, Anglican Educational Chaplain, the Rev. Sarah Holmström, shared some of the highlights of Anglican Student Ministries (ASM). She gave thanks for a flourishing partnership with the Lutheran Student Movement and its pastor the Rev. Richard Reimer. With the help of the Rev. Alex Meek, they continue to offer the Worship Room (a Sunday evening supper and service) at St. George’s Anglican Church. Students also gathered regularly at a Whyte Avenue brewhouse for Pub Theology with newly appointed Educational Chaplain the Rev. Heather Liddell.

The intentional Christian communities of St. Aidan’s House at St. George’s by the U of A and Martin Luther House also went on three student retreats together, made possible by a Lutheran/Catholic ministry grant. This spring, the communities will plant a garden at St. Aidan’s to grow fresh produce for the Edmonton Food Bank and the PrayerWorks Hall community meal program at St. Faith’s, where students help serve a meal every other month.

The Interfaith Chaplains Association at the U of A began the school year by hosting a Transitions Lunch and handing out free cookies during the Week of Welcome in September. Through a partnership with the International Students Association, members took part in an International Week event called “Singing Justice – Inspiration for the Journey.” In the face of cold, wind and snow, they served pancakes on campus on Shrove Tuesday, and offered ashes and blessings as part of the Ashes to Go movement on Ash Wednesday.

Acting as moderator, Sarah invited questions for Andrew and Adam, via text and index cards, from members of the chaplaincy dinner audience, which included university students and supporters of Anglican and Lutheran campus ministries.

“Some would argue that where we come from is a spiritual question and that it gives meaning to people to know and understand where they come from,” said Sarah. A good example is the popularity of internet sites like Ancestry.ca and the DNA testing service 23 and Me. “Andrew, what meaning does having a God-created view of the universe bring to your life?”

“I would say that theism in general is deeply meaningful for the intrinsic work of humanity,” responded Andrew. “It ties us all together. Not only does it give us the starting push, it is the sustaining source of all existence and love. This is not only meaningful to me, but it’s meaningful to my neighbour. That’s where abstract metaphysics, to me, becomes emotionally moving and religious.”

Adam responded to the same question by reflecting on the work of astronomer Carl Sagan, whose belief is that the Big Bang created the elements of hydrogen and helium which then formed gas clouds that collapsed into stars. “And stars are nuclear furnaces. They fuse atoms together into heavier elements and release energy. When very old giant stars die they explode and spew atoms back into the universe. All the heavier elements on this planet, in your body – the carbon in your bones, the oxygen you breath, the gold in the rings you wear - are made up of atoms forged billions of years ago, millions of light years away, in the hearts of massive stars. They were dispersed into the cosmos when those stars died to take part in a new cycle of creation. I find that a very humbling and uplifting view because it shows, in a deep and fundamental way, that we are not just connected to the rest of the universe, but we are part of the universe. We are part of its substance and we will return to it one day just the way we came,” he said.

In response to Sarah’s wonderment over how they have been able to respect one another’s differences and still be friends, Adam said: “We have both observed that our beliefs start from very different premises but end up at fairly similar conclusions. I think that’s really the thing that matters. That you can justify your beliefs in a different way, but you can still agree on what is right or wrong for the most part. And, hopefully end up in a place where you can recognize that, despite your philosophical or metaphysical differences, you share similarities that are more real and, perhaps, more significant. For the most part, I think the things that humans agree on are much more important than the things we disagree on. It’s just that the things we disagree on tend to loom larger, because we so easily fall into the trap of tribalism. I think when you can encounter other human beings, even one who is superficially very different from you, but yet, still recognize that we are more the same than we are different, I think that’s the foundation of respect.”

For Andrew this uncommon friendship and partnership grew out of his admiration for “someone who is willing to seek truth and to celebrate something really important together. You have that person in your workplace, and you have that at school and you have that wherever you go. Not everyone’s going to be Anglican or Lutheran or Catholic. To add to Adam’s point, there are a lot of commonalities in just being human that we can rally around. As for Adam, he’s a friend of mine, our families hang out together and we’re doing something really important together. As I say in the book, ‘let’s change the world together, and we’ll debate on metaphysics on the ride over.’

Andrew and Adam are donating a portion of the proceeds from the sale of their books to Polaris (www.polarisproject.org/human-trafficking), a nonprofit organization working to end human trafficking by raising awareness and advocating for legislative change. Human trafficking is a multi-billion dollar criminal industry that denies freedom to 20.9 million people around the world. Polaris has operated a national support hotline in the US for more than 10 years, and recently launched the “Vision 2020 Project” to build a data network (partnering with major uses airlines and hotels) to rescue victims and track the patterns and behaviours of pimps. In addition, Polaris works to rehabilitate victims, providing them with psychological counselling (it is estimated that 9 out of 10 sex trafficking victims return to their pimp or trade), and helping them out of addiction and into secure jobs.