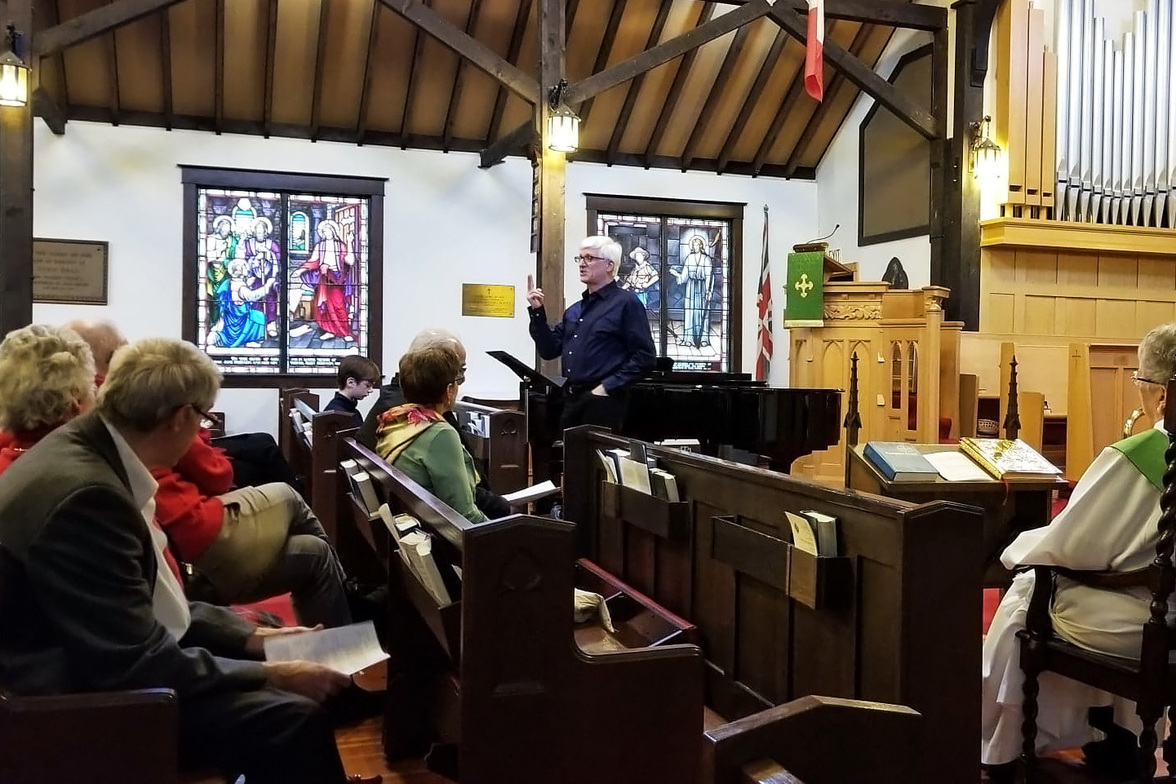 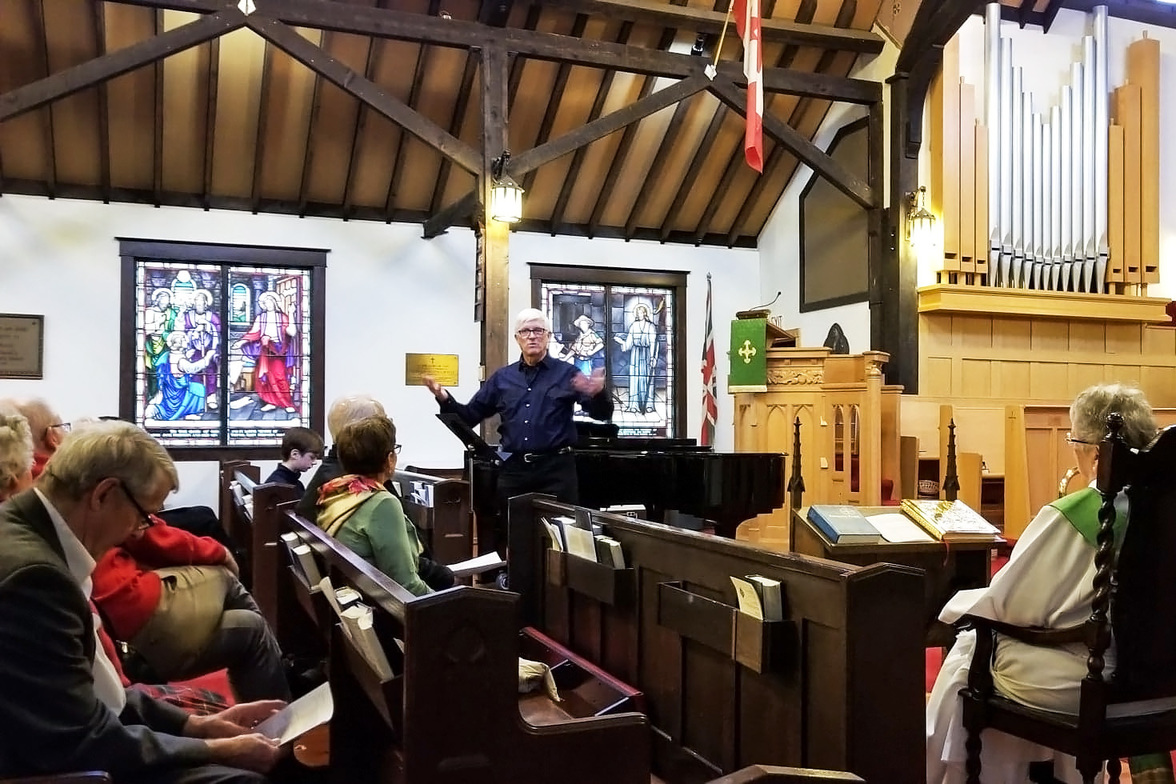 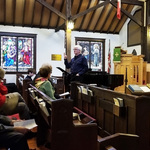 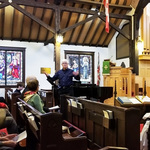 Guest preacher, Dr. Brian Walsh, a Christian Reformed campus minister at the University of Toronto, was welcomed and introduced to the Christ Church, Edmonton congregation by rector, the Rev. Susan Oliver, on Sunday, January 27.

Walsh is pastor of the Wine Before Breakfast ministry, a weekly early morning eucharist service held in the Wycliffe College chapel. The Rev. Canon Chelsy Bouwman, associate priest of Christ Church, was a member of the Wine Before Breakfast community while studying at Wycliffe and, as Walsh noted, she had relished being ‘the only girl in the (worship) band’ for several years.

Walsh and his wife, Dr. Sylvia Keesmaat (she was guest preaching at St. Mary’s, Edmonton), presented at The King’s University Interdisciplinary Studies Winter Conference, “Rooted in Place,” January 23-24. While in Edmonton the couple, who together has written two books, Colossians Remixed: Subverting the Empire and the forthcoming Romans Disarmed: Resisting Empire/Demanding Justice (spring, 2019), enjoyed the hospitality of the Oliver-Martin family. Walsh is a long-time friend of Dr. Stephen Martin, professor of theology at The King’s University.

Addressing the congregation Walsh said, “It’s interesting to try and give a sermon this morning because, if you noticed, two of our scripture readings were about a sermon.” In Nehemiah (8:1-3, 5-6, 8-10), Ezra preaches a very long (six-hour) sermon, and then, from the Gospel of Luke (4: 14-21), we hear Jesus’ “really short sermon.” Jesus of Nazareth reads from the Isaiah scroll in his home synagogue, “one of the most important texts in all of Israel’s memory,” and with all eyes fixated on Him says, ‘Today this scripture has been fulfilled in your hearing.’

“Truth be known preachers, stewards of the Word, are looking for a response,” Walsh said. “Folks who get up week in and week out, year in and year out don’t do this just because of their job description. Nor do they do this because they happen to like the sound of their own voice. Preachers are looking for a response because they believe the word of God is powerful; sharper than a two-edge sword to cut though the lies and delusions of our lives; with enough power to bring life out of death.”

Raised in a non-Christian family, Walsh said an encounter with a group of Christians at Yonge Street Mission in downtown Toronto transformed his life.

“There was something about how they lived together and how they engaged me that made me curious and, eventually, jealous,” he said. “Then, at the right time, about three or four months into my time there, somebody handed me a little booklet, The Good News According to John.” Up until that point, he had not been a reader.

“The character in the story called out to me and I read until two in the morning. I wanted to believe in Jesus. The problem was Jesus was connected with God and I didn’t believe in God. So I prayed my first prayer: ‘God if you’re there, I wanna know. Good night.’ I woke up in the morning and I knew. I became a Christian and the scriptures have animated my life ever since.”

One way for a preacher to incite response is to assign homework. Walsh urged members of Christ Church to “Go home, take your bible off the shelf, turn to Luke 4 and keep reading (verses 22-30). Ask yourself, how might I respond? Then make an appointment with Sue, Chelsy or Nick (Trussell) to talk about it.”

When the Rev. Sue Oliver preaches, her intent is to convey the gospel and, hopefully, to promote a response.

“My hope is that people's lives will change because of their relationship with Jesus,” she says. “If my preaching can have a big or small part in that lifelong journey of transformation, then I am so very glad.”

Oliver says she is always heartened when someone mentions something from a sermon, and is overjoyed when the younger demographic is tuned in.

“I feel that I have really 'hit one out of the park' when a teenager mentions something I said in a sermon, relating it to their own life.”

She was somewhat surprised to learn that a heartwarming parish response to an ambitious community initiative last summer had been prompted by her preaching.

“Every Friday evening for eight weeks we hosted a free neighbourhood barbeque,” she explains. “The turnout was such that our volunteers became weary and I began dreaming of flipping hamburgers in my sleep.”

When she asked a member of the congregation why she had so readily committed to helping out each week, the young adult’s honest response was ‘well, we are doing this because you told us to in your sermons.’

“I was pretty sure I had not ever explicitly said that Jesus commanded us to serve 140 burgers every Friday night until we expired...but I suppose I had promoted a gospel message of hospitality, an open door and caring for our neighbours,” she says. “This young woman had been listening and responded with her hands, feet and willingness to give up her Friday nights to serve others!”

You can listen to Dr. Brian Walsh’s January 27th sermon on the Christ Church website.