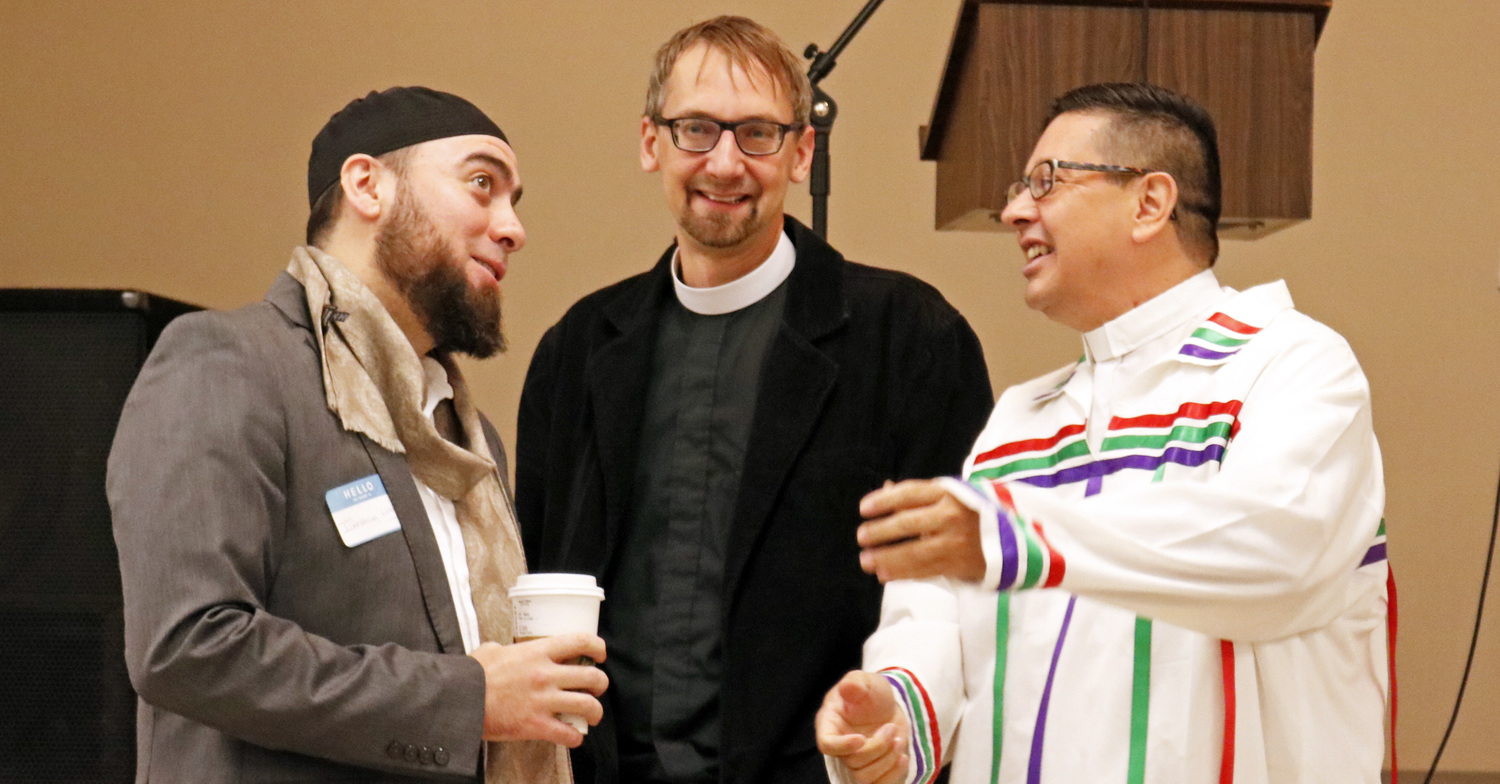 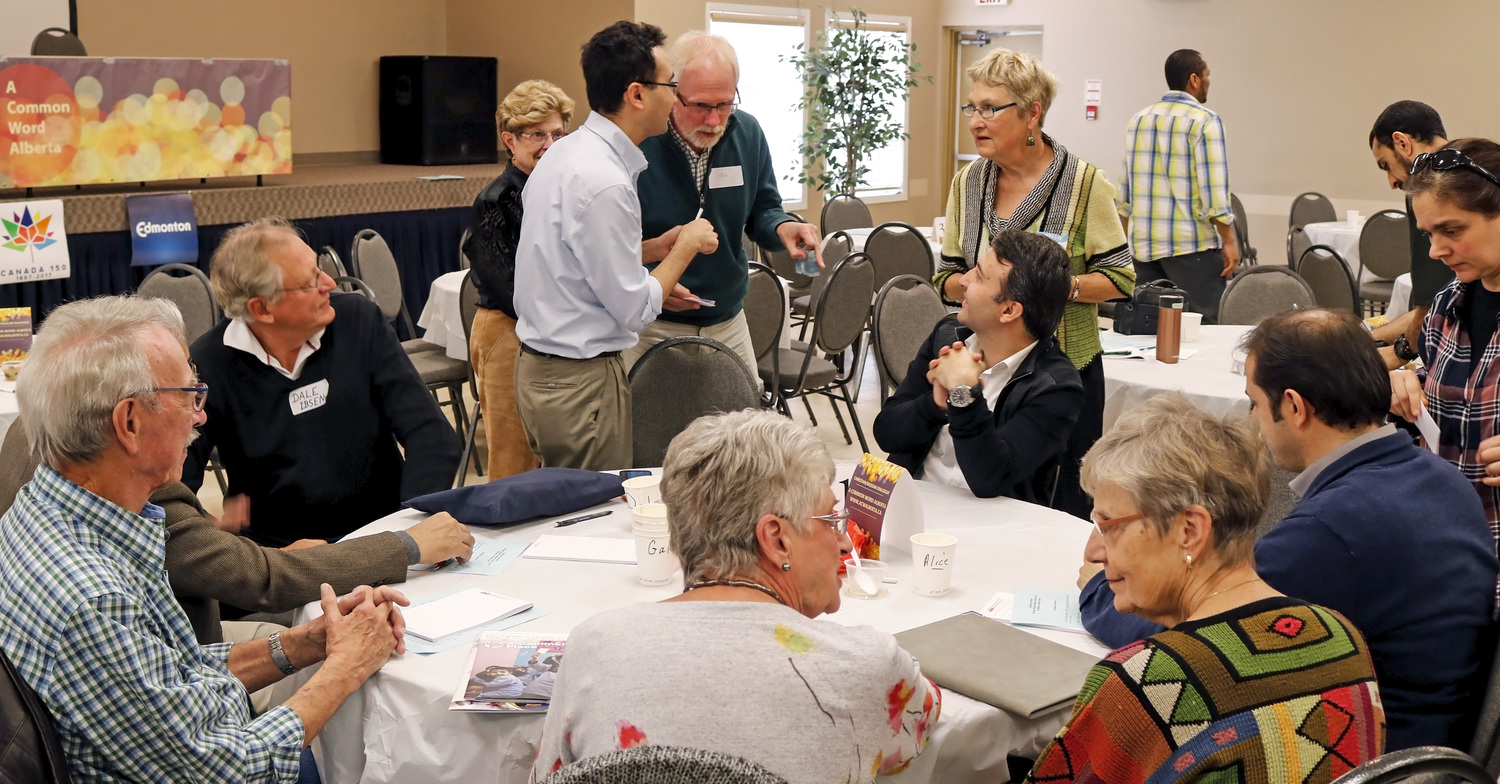 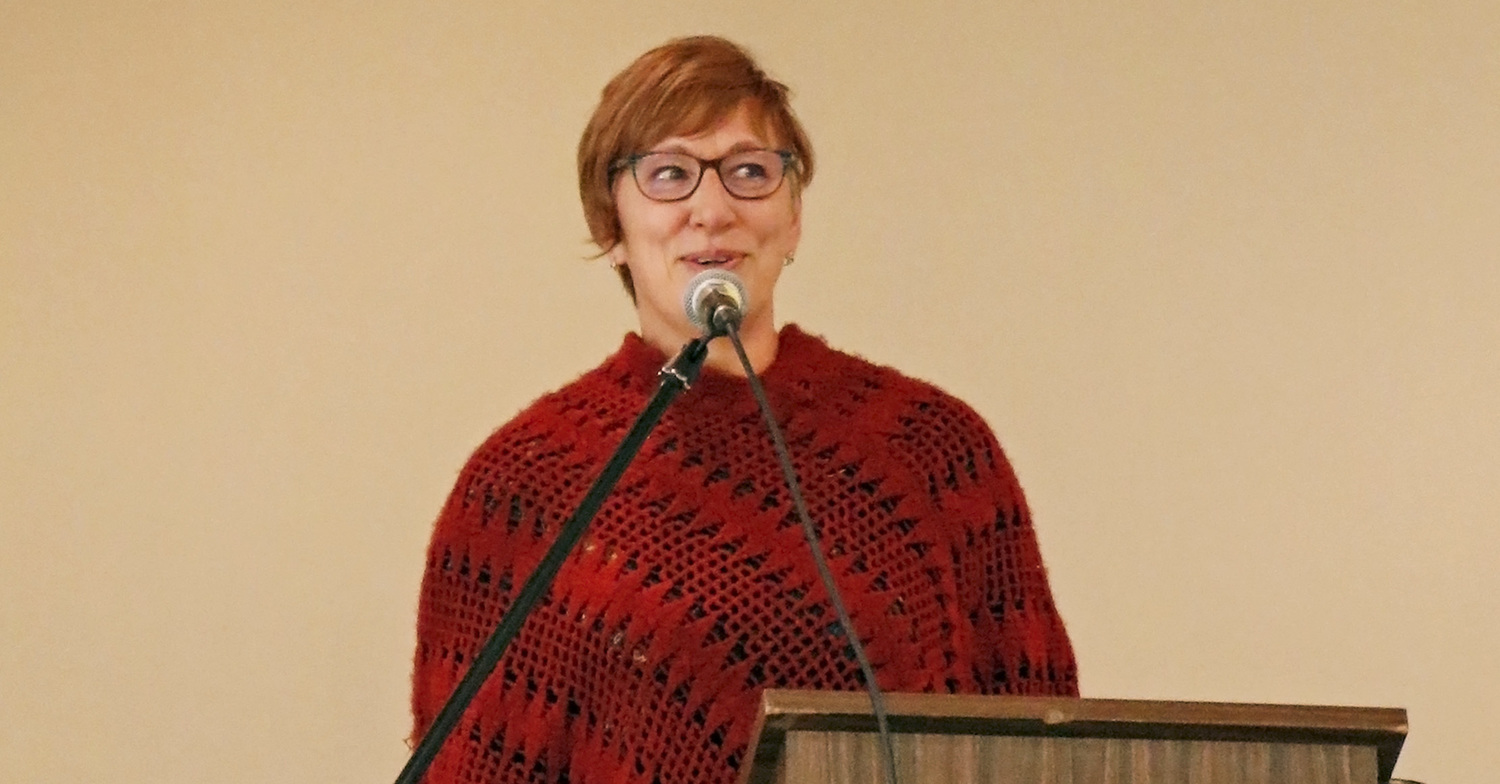 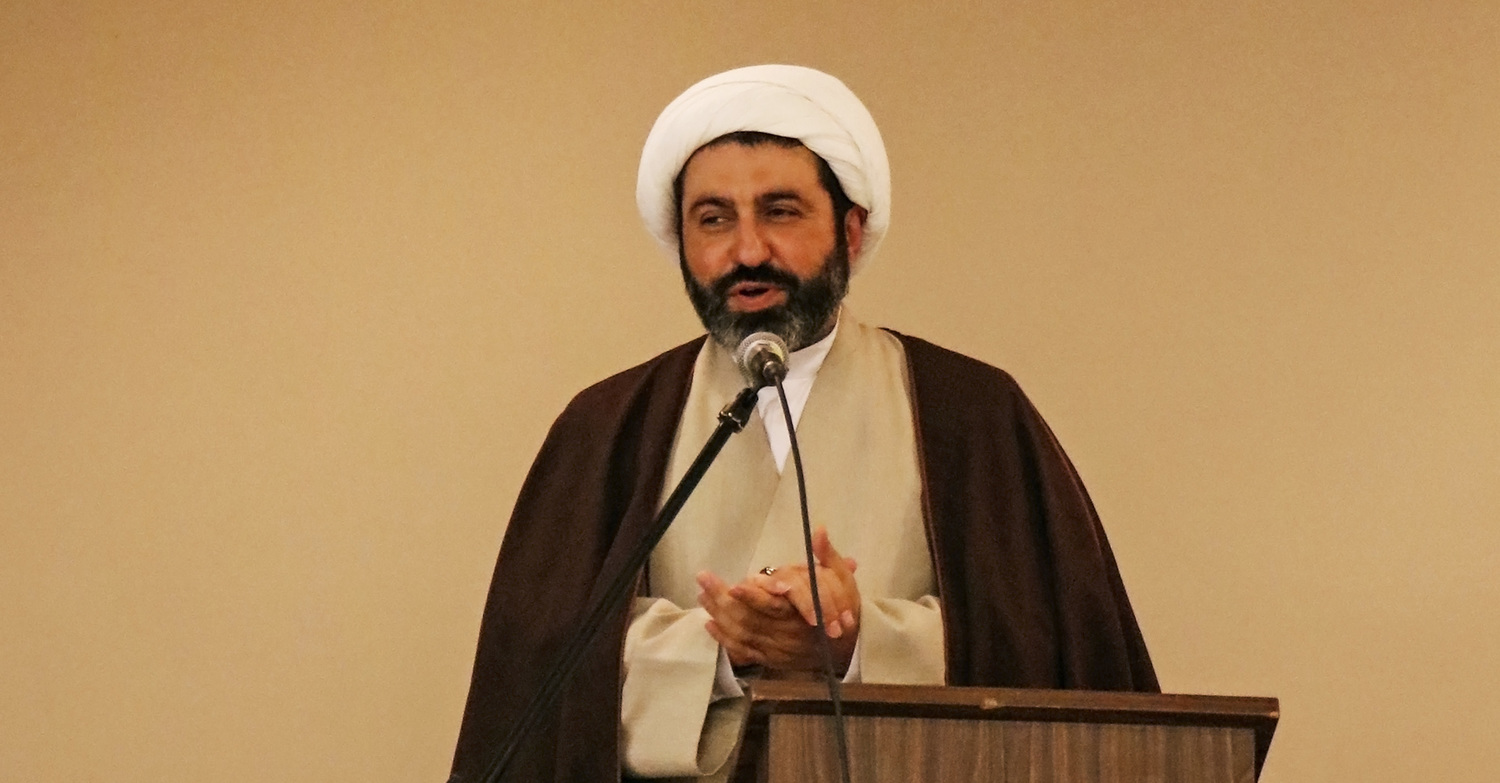 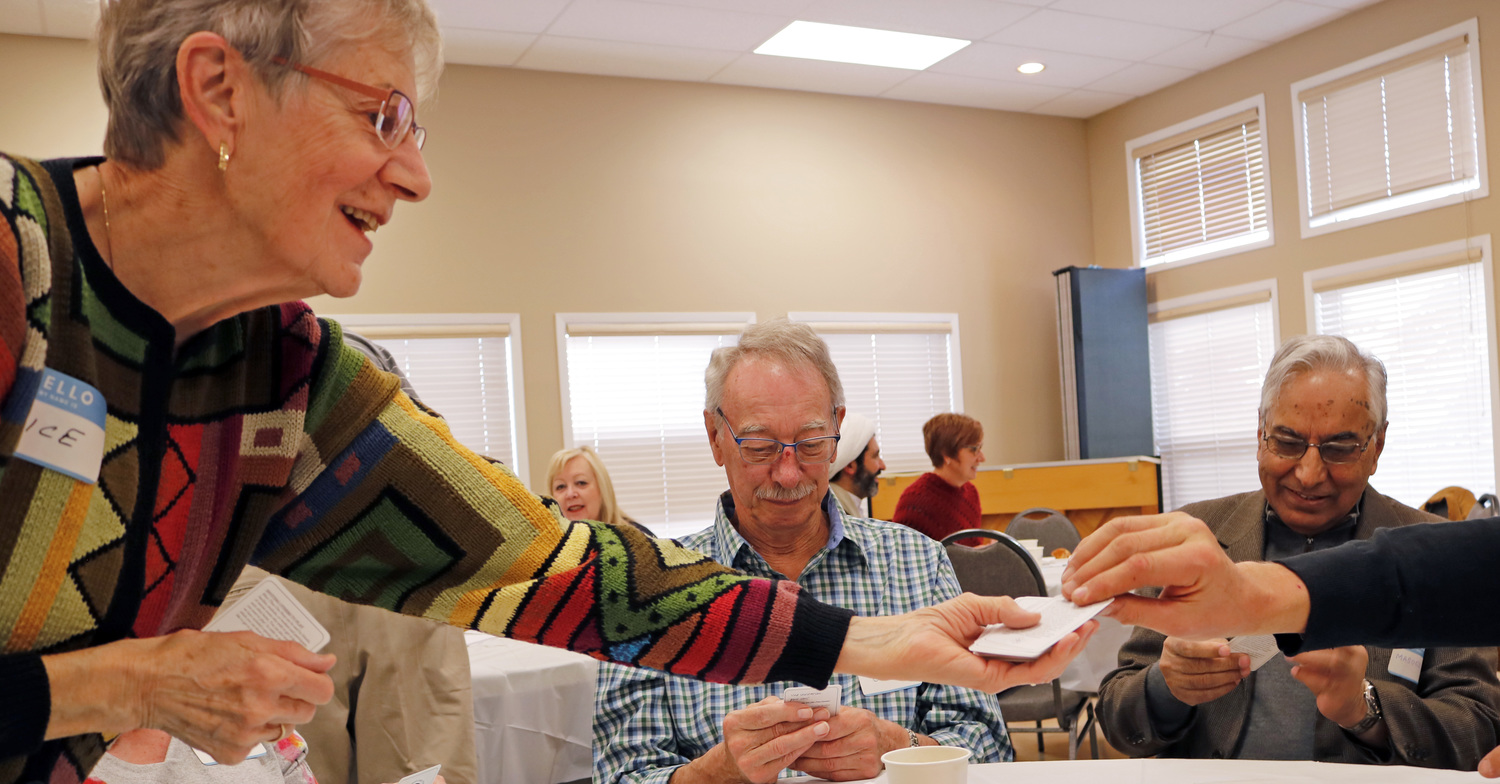 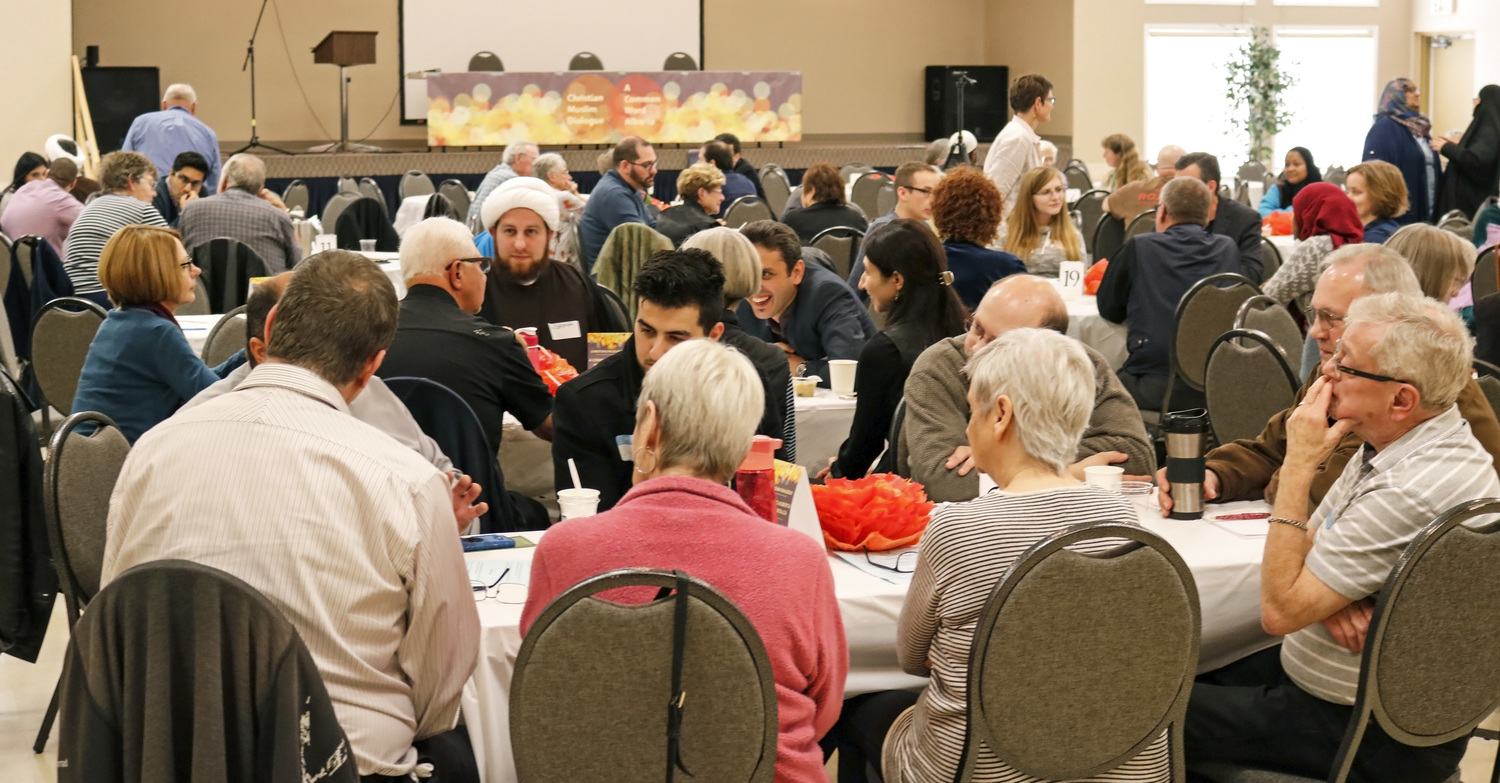 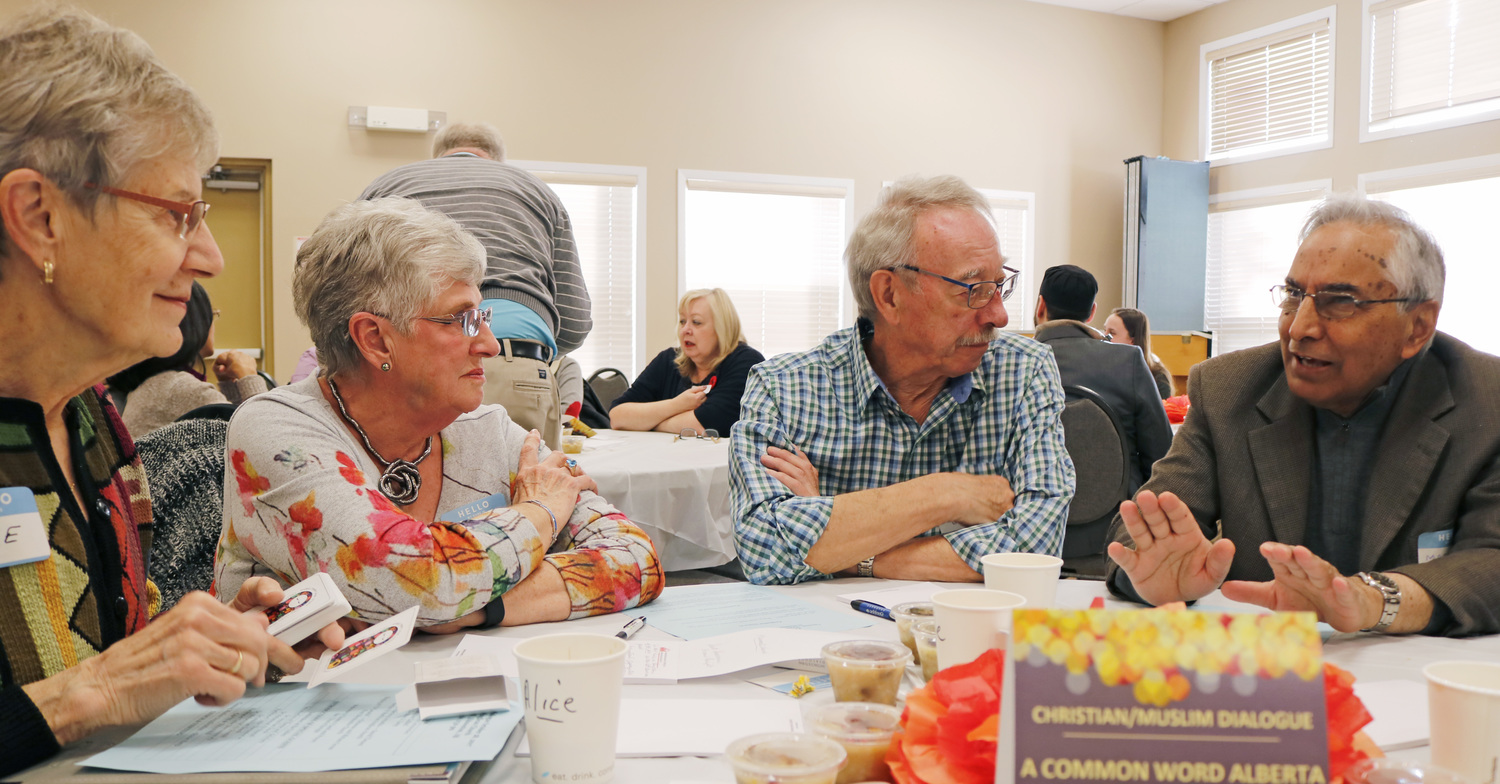 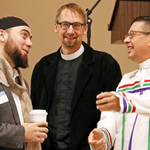 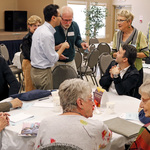 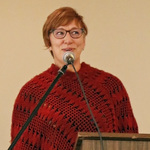 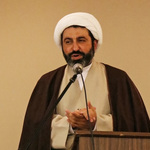 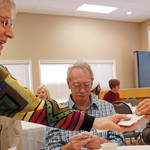 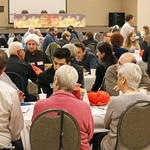 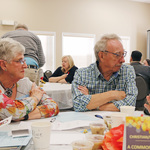 The 5th annual Christian-Muslim dialogue event: “More Important Now Than Ever,” drew more than 200 members of Edmonton Christian and Muslim faith communities, including many faith leaders, to St. Matthias Anglican Church on October 28, 2017. The Ven. Travis Enright, archdeacon for Indigenous Ministries, offered smudge and prayer, giving thanks to the Creator for this gathering on traditional Treaty 6 First Nations and Papachase land.

“Interfaith dialogue is no longer a luxury. It’s a necessity," said Ibrahim J. Long, Islamic Studies Coordinator and Chaplain at Edmonton Islamic Academy, Alberta Health Services, NAIT, and Tarjuma. Long emceed the Christian-Muslim dialogue with the Rev. Heather Liddell, assistant curate at Holy Trinity Anglican Church, and Alberta Regional Coordinator for Messy Church Canada. Long and Liddell quizzed one another about the symbols they wore as a sign of their faith. Liddell said she wears her clerical collar as “a symbol of my office in the world that says to people if you have questions about Jesus, come talk to me.” Long described the pin he wears above his heart as a symbol of the Prophet Muhammad’s sandal “to show that we follow in His footsteps.”

A worldwide initiative launched in 2007, A Common Word proposes that, based on verses from the Holy Qur’an and the Holy Bible, Islam and Christianity share the paramount commandments of loving God and loving one’s neighbour. “ACW is an extended global handshake of inter-religious goodwill, friendship, fellowship and consequently of world peace” (from the Fifth Anniversary A Common Word Between Us and You).

The Rev. David Tiessen, rector of St. Matthias, offered words of welcome and a reflection on prayer, which he described as “Coming in humility before God. Christians and Muslims pray differently, and yet, we begin in the same place,” he said.

Scholars Dueck and Shomali reflected on the reasons why they believe Christian-Muslim dialogue is valuable. In 1997, while completing her Doctorate of Theology at the University of Toronto, Dueck says she was asked by the Mennonite Central Committee to host a group of Shi’a Muslim students from Iran. Through these friendships, she gained a better understanding of the Muslim faith while growing in her own faith. “To think that we have to justify conversation and dialogue with each other, strikes me as a bit of a problem,” she said. “Part of our calling as Christians is to model divine love. As people of faith we share many things in common, the greatest of which is our deep love of God and our deep belief that our lives are a gift from God.”

Shomali is a graduate of the Islamic Seminaries of Qum and has both a BA and an MA in Western Philosophy from the University of Tehran. While earning his Doctorate in Philosophy from the University of Manchester, he endeavoured to meet Christians and learn about the Christian faith. “I knew very few Christians in Iran,” he said. “While I read many books, text cannot convey the depth of tradition. I encourage my students to welcome every opportunity for face-to-face interaction.”

He was surprised to learn that it was not always easy to find openly practicing Christians, although he did eventually make contacts through a Catholic friend in Liverpool and was invited into the Benedictine community at Ampleforth Abbey. He discovered many similarities between Christians and Muslims and planned his first Catholic-Shi’a dialogue in 2003. He has since published several papers and books on the subject.

Shomali said it is unproductive and exclusive to focus on what other people are not, rather than what we are. “It can be dangerous and lead to extremism.” Instead, we need to have a strong understanding of our own values, in order to understand and accommodate other’s values. “Our differences should not be an excuse, to avoid communicating with one another. Man made different religions, not God. Always in more than 20 years of interfaith dialogue, I have focused on God’s plan for humanity: perfect unity. All human beings are people of God. He made a beautiful mosaic.”

In table groups, participants in the Christian-Muslim dialogue discussed several topics such as: our role as global citizens, opportunities to strengthen Canadian and Edmonton society, our experience of encountering others different from ourselves, and how our own faith has been enriched by those encounters and friendships and what initiatives we have and could take to connect church and mosque in our own neighbourhoods.

The Rev. Canon Dr. Scott Sharman, ecumenical and interfaith relations animator for the Anglican Church of Canada, has helped organize many Christian-Muslim dialogue events, and reflected on how interfaith and ecumenical experience have enriched his own faith.

“Interfaith dialogue has given me a bigger picture of who God is and how God works. Naturally, each one of us approaches the Divine with a particular set of assumptions and expectations that we inherit from our families, our churches, and so on. This is inevitable, and there is nothing necessarily wrong with it unless of course we begin to think that our particular point of view exhausts the mystery completely. Having grown up in the Church, in a devout Christian family, with an active faith life from my youth, and with more time spent in theological college than is probably good for anyone. There was a time in my life when I thought I had a lot of the mystery of God stuff fairly well figured out."

“But surprise, surprise, a middle class kid from suburban west Edmonton didn't have the market on God cornered. When I started to study, and to read, to meet and befriend people from other faith traditions, and to see how that faith influenced their lives and communities, I had to take a step back; I had to learn the biblical lesson that, even as people who follow Christ, we see God now only as though looking through tinted glass (1 Cor. 13:12). For me this has never meant diminishing my faith in Jesus, but rather has served only to expand it. That sense of greater awe and wonder which I received from the encounter with religious otherness has stuck with me ever since. “

“The second gift I have received through my ecumenical and interfaith journey is that it has made me more careful in the way that I speak about my faith to others. Perhaps the only valid response to being struck by God's greatness in the way I described above is to take on an attitude of humility. When I meet people, when people ask me questions about God, when I have the opportunity to write and to teach theology, I seek to carry that humility very closely. I think I am more inclined to listen than to speak, and to listen with openness and generosity. When I do talk, I think I'm more sensitive and gentle in the way I do so. To put it succinctly, my way of witness to Christ can never be comfortable coming through monologue, but is forever shaped by a commitment to dialogue.”

For those who are interested in learning more about other faiths, the North American Interfaith Conference is coming to Edmonton this summer. For more information, visit: http://allfaithcenter.org/nain2017/