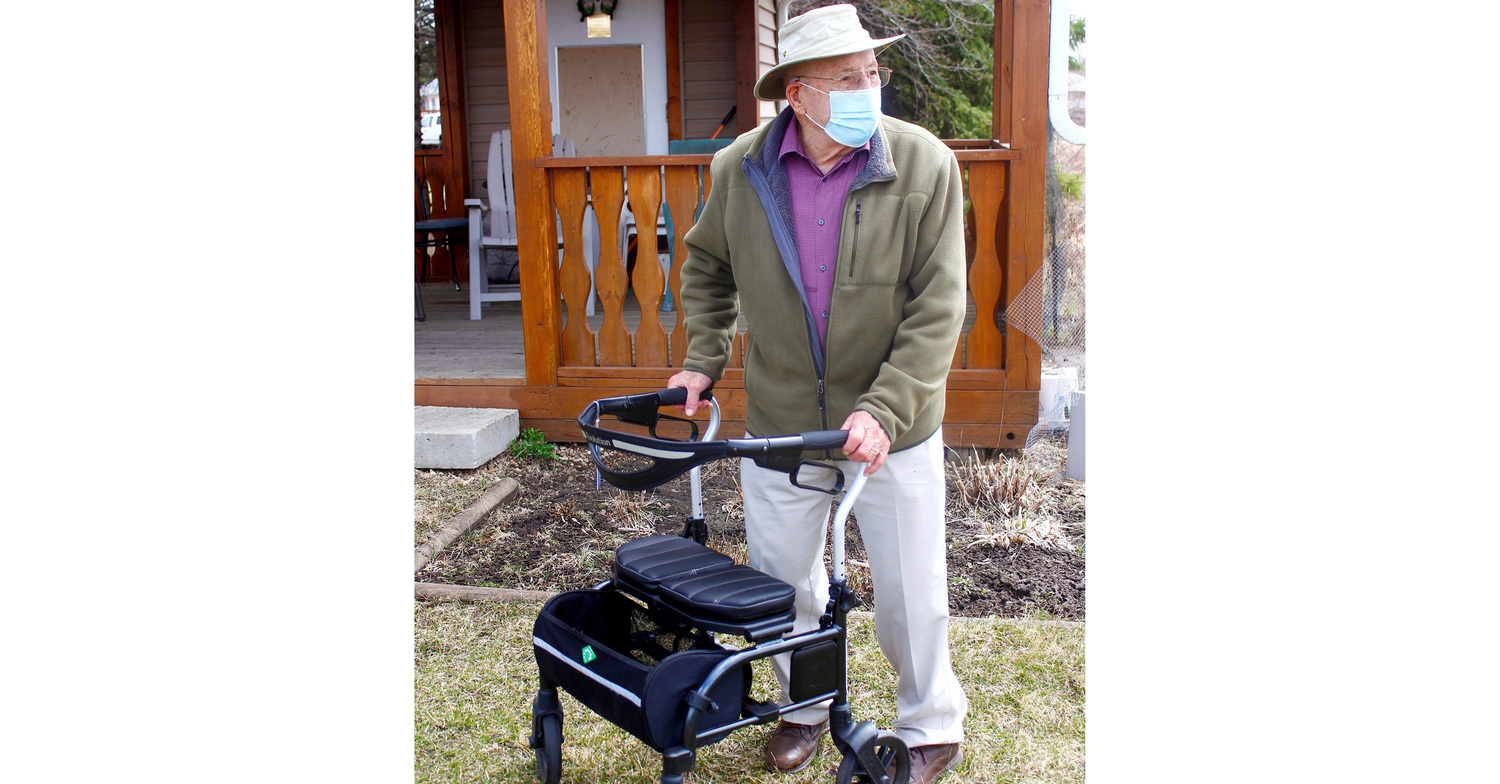 The COVID-19 pandemic kept 93-year-old George Crowhurst from meeting up (at least in person) with members of St. Mary’s Anglican Church in Ponoka for coffee and a weekly chat but be darned if he was going to “sit around and do nothing.” Instead, he completed a 451-km virtual trek through the Grand Canyon.

After hearing about his friends’ virtual adventures around the globe, to places like Portugal and Australia, Crowhurst, a member of St. Mary’s since the early 1950s, decided he would like to see the Grand Canyon from the vantage point of the Colorado River.

“My late wife Jean and I had flown over the Grand Canyon numerous times, and I always wondered what it would look like from the river,” he says.

Crowhurst downloaded a virtual walking challenge on his iPhone and set out through the Grand Canyon by pushing his walker up and down the empty hallways of his retirement home.

“Depending on how motivated I was, some days I’d walk a km, other days seven kilometres,” says Crowhurst. With his phone tracking his steps – all 702,645 of them, he would walk each day late in the afternoon and early in the evening, then log the distance in his walking journal.

“I’ve always tried to walk to keep active and stay healthy,” says Crowhurst who had open-heart surgery in 2002.

Two months into his virtual walk the retired geriatric and psychiatric nurse awoke early in the new year with his “left arm and leg feeling like blocks of wood.”

He called an ambulance and was taken first to the local hospital in Ponoka and then to Red Deer to be seen by a neurologist. “He said my carotid artery was 90 per cent blocked.”

The next day doctors at the University of Alberta Hospital in Edmonton inserted a stent into Crowhurst’s blocked blood vessel and “I could feel the difference right away,” he says. “I know what strokes can be like and darned if I was going to be incapacitated.”

Once home, Crowhurst called his daughter, a homecare nurse, “and my next call was to Maxine (a member of St. Mary’s prayer group). “When I called the Prayer Warriors things started to happen.”

Ten days after suffering a stroke, Crowhurst resumed his walk which he eventually completed in 145 days.

“I went down to the drugstore where I purchased my walker and told them I wanted a 500-km overhaul,” he laughs. Pharmacist Jamil Rawji (who George has known “since he was a kid”) was inspired by Crowhurst’s story and pledged $1 for every kilometre he had completed of the Grand Canyon walking tour.

“Deb Stevens, St. Mary’s and her daughter Chelsy (Bouwman, Canon Pastor for Rural Ministry) walked the Camino in Spain. I might try that one next,” he says.

Although he was getting the hang of participating in Sunday-morning coffee-hour by Zoom, Crowhurst says “it’s not the same as when you’re with people.”

As summer arrived and pandemic-restrictions were lifted, he began spending more time outside walking through the Ponoka Community Garden where a few of the members of St. Mary’s have gardens.

“It’s so peaceful and lovely. There are birds and deer. I stop and rest if I get out of breath. I listen to my body.”

Walking has given Crowhurst an appetite and he is looking forward to the family birthday dinner his daughter is planning for him in August.

“She will probably make my favourite meal, roast beef and Yorkshire Pudding.”

Maintaining a positive outlook when faced with health issues is something George has in common with his 65-year-old son, the recipient of a double lung transplant.

When asked what Jean would have thought of his motivation to see the world and stay active (the couple was married for 52 years), he says, “she would have encouraged me. I hope by sharing my story I can do the same for others.” Photo: Emily Jaycox/Ponoka News