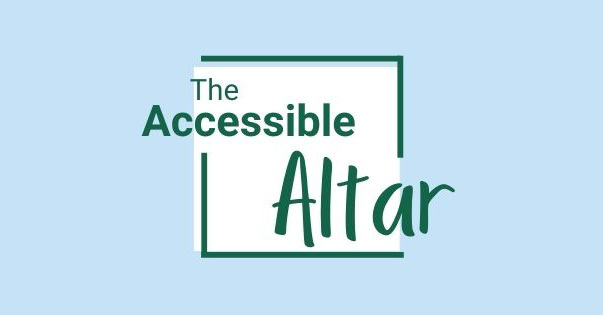 You will never hear the Rev. Robyn King instruct a congregation she is leading in worship to “sit, stand or kneel.”

In the Anglican/Episcopal sphere, “that’s a fairly radical approach to space and communal actions, and I’m still afraid it’s going to get me into trouble,” Robyn tells the Rev. Stephanie Shockley in the first episode of their aptly titled The Accessible Altar podcast. “Instead, I say to people, ‘do what makes you comfortable and helps you worship. If that means you are doing something different than your neighbour, please don’t worry.’” (It is becoming more common for church leaders to say, ‘stand, sit or kneel as you are able.’)

For people living with a disability, liturgical customs and practices able-bodied people seldom give a second thought, such as standing for hymns, kneeling to receive communion, or sometimes the act of going to church can be uncomfortable, painful or not possible.

On their monthly podcast, co-hosts Robyn and Stephanie, Anglican/Episcopal priests who met at General Theological Seminary in New York City, discuss ableism and accessibility in the church with candour and often humour.

“I don’t think it’s a surprise to anyone that the church doesn’t always deal with issues such as accessibility well,” says Robyn. “If it did, we wouldn’t need to have a podcast about it.”

If Robyn, rector of St. Paul’s Anglican Church in Leduc, and Stephanie, who leads an Episcopal parish in New Jersey, seem particularly sensitized to the challenges of people with disabilities, it is because they are.

In Episode 1, Robyn, who grew up in Montana, shares her family’s traumatic experience of Robyn’s mother’s diagnosis of brain cancer when Robyn was 9. After her first year of university while in the discernment process in the church Robyn, age 19, had the first of three surgeries to remove non-cancerous growths on her pituitary gland at the base of her brain.

“I was trying to figure out how all that was going on in my life worked with all the beautiful theologies and liturgies I was studying and experiencing,” she says. “Seminary was very formative in a lot of different ways. But, at least in my training, we didn’t have a lot of conversations about what it is to preach on the healing miracles. What do we do with the Old Testament laws? How do we talk about this in a world where one in four or five people are technically disabled even if that’s not their identity? So they have some experience of having a need that society prefers to ignore.”

When faced with the difficult decision of having brain surgery on the anniversary of her mother’s death or during Spring Break of her senior year of seminary, Robyn chose the latter. When attending Maundy Thursday worship (one of her favourite services), she was dismayed to discover all the foot-washing stations were only accessible by stairs.

“That was hard,” she says. “It was my introduction to the concept that church is literally inaccessible sometimes.”

Robyn’s experience with pain and suffering has shaped her ministry. “I’m probably more comfortable saying, “look, there are questions we don’t have answers to, but here’s what I believe. I don’t believe God is punishing you. I don’t believe this is some cosmic lesson you have to learn. Sometimes things are terrible and, I believe, God is with you in that. I believe God is the ultimate creative and wastes nothing which includes our pain, suffering and misery. But God doesn’t create any of that. God responds to that creatively with love and generosity. That’s not easy for me to believe every day, but it fits with the God I see in Scripture.

“I’m also more sensitive to people who find the way we’ve been doing church isn’t working. And I’m more willing to say, ‘if this isn’t working, we’ll do it differently.’”

While engaging with the disability Twitter community (an underrated resource with a lot of energy and information as far as Robyn and Stephanie are concerned), Robyn, AKA @theologybird, realized that “people are not always aware that the barriers or inaccessibility they encounter are part of a larger, systemic inability to grapple with ableism and inaccessibility. None of us are alone in struggling with trying to be faithful in community with accessibility issues. Beloved children of God come in a range of bodies that work in a range of ways.”

In Episode 2, Stephanie who has a form of albinism and is visually impaired, says witnessing people’s attitudes toward elderly people and people deemed vulnerable at the start of the COVID-19 pandemic was a major factor in her decision, in early 2020, to accept Robyn’s invitation to partner with her on the podcast.

“It highlighted for me the sense I had there’s so much entrenched ableism in our society, and there are so many ideas about some people being essential and others disposable,” she said.  “The reality is that we, as a society in general and as faith communities in particular, have not done work on disability justice…I’ve been aware of these issues in a greater or lesser extent my whole life, but I was seeing them laid bare and I thought, ‘maybe it’s time to talk about them.’”

Spending hours over an open Zoom channel between Alberta and New Jersey, the priests hashed out a title for their podcast that they are particularly thrilled with because it both conveys meaning and employs the literary device of alliteration.

“For liturgical Christians, the altar is often a core symbol of what it means to be the body of Christ in worship together,” says Robyn. “We chose The Accessible Altar in recognition that the altar is not usually fully accessible to everyone. By inviting conversation, Robyn and Stephanie “hope to reshape ableist theology and make more altars more accessible.”

Ultimately, they are creating a safe and accessible space for people who are disabled to know they are not alone: “there are lots of us out here,” says Robyn, “we just don’t tend to talk about this.”

The Accessible Altar is produced entirely “in-house,” with Robyn editing the audio and Stephanie doing the transcription. The social media and website graphics were designed by the Rev. Stephanie London, rector of St. Columba in Beaumont. Music was composed by Nathan Leigh.

Next up, The Accessible Altar will delve into the “fascinating” parallel between the AIDS and COVID pandemics. “Our list of people we’d like to talk with and topics we’d like to touch on is more than a page long,” says Robyn.

You can listen to episodes at theaccessiblealtar.com and on Apple and Spotify.