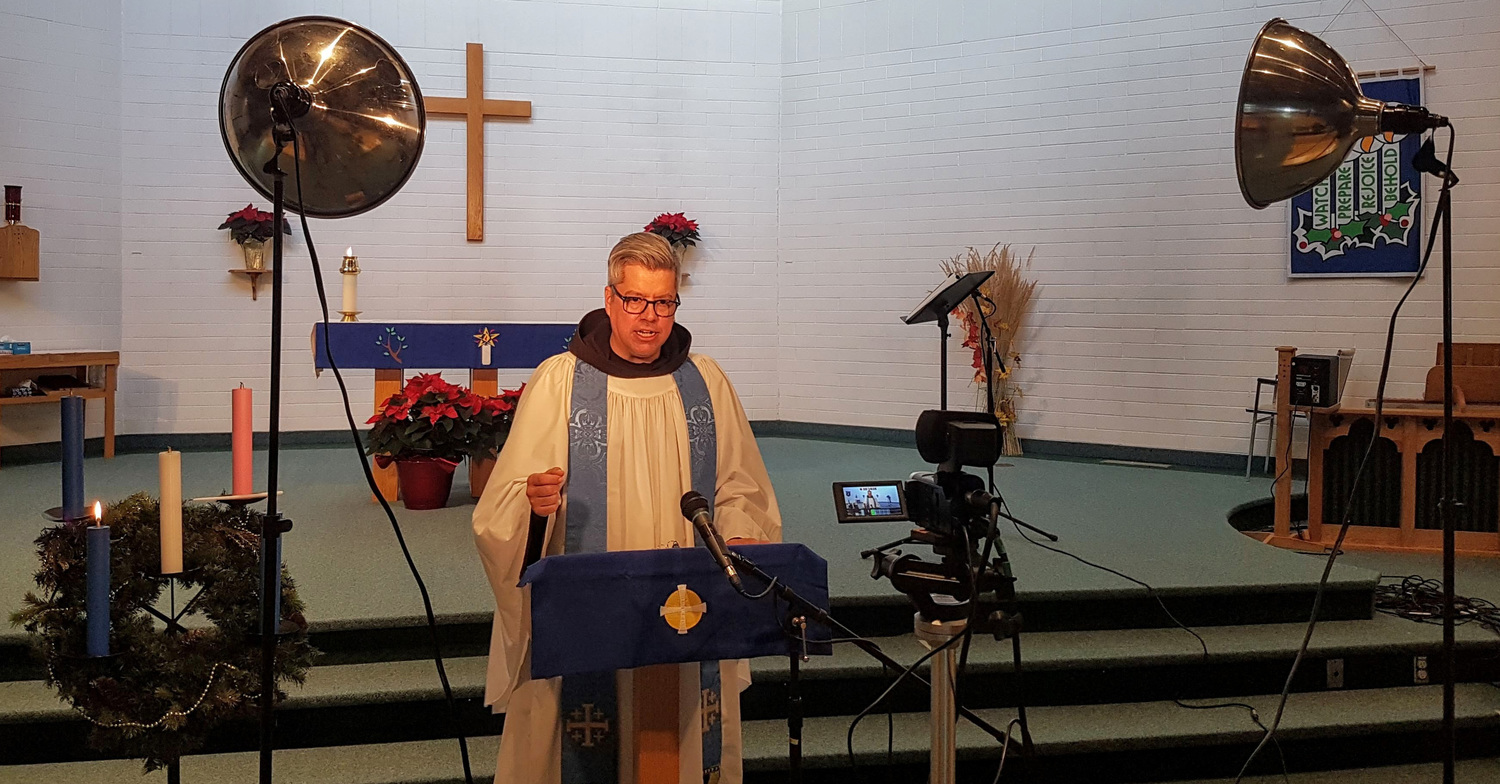 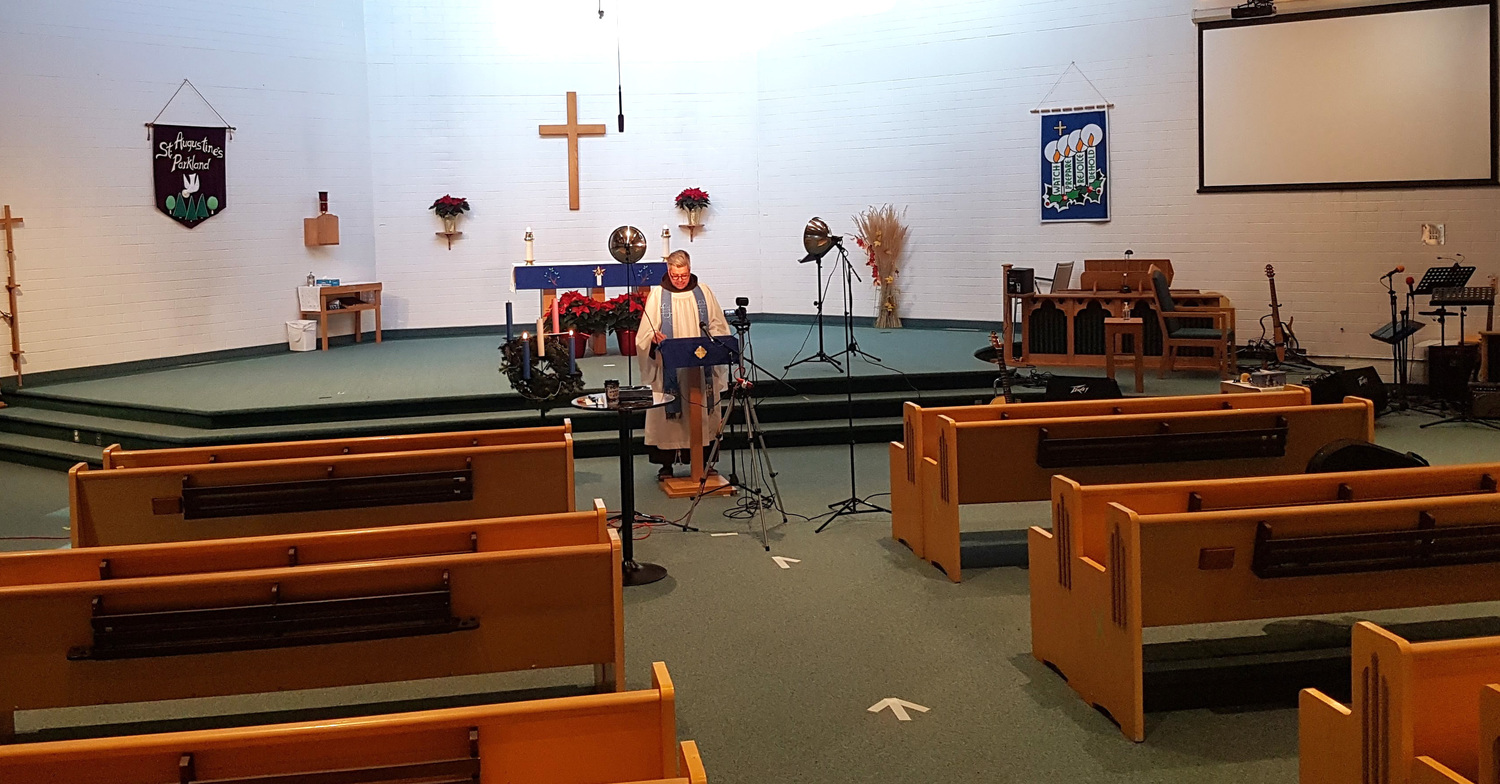 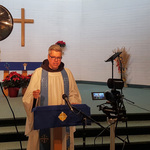 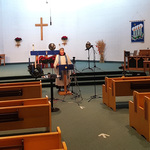 Since March 2020, many parishes have taken on, to one extent or another, the practise of providing worship services online. For a few this has been familiar territory. For most, it has been a big learning curve with great reliance on those in our parishes who have or were able to to learn the technology. Following is the story of how this journey has unfolded at St. Augustine Parkland in Spruce Grove.

Pretty well every Saturday morning since April, a small group meets to produce and record our online Sunday services. Most of the time, that’s at our church building, but in the spring and summer, we often recorded at St. George’s in Fort Saskatchewan because our then-assistant, Rev. Aaron Parsall-Myler, had responsibilities also with that congregation. The group has ranged from two souls to perhaps a half dozen, all dedicated to bringing God’s word directly into your living room, den, kitchen, or wherever your computing device of choice is located on a Sunday morning!

I thought some of you might want to know what goes into the making of each of these “episodes,” which we’ve learned are viewed not only by members of our own congregation but by others, often in far-flung locations. (For example, Tony and Tina Foote, former members of our congregation who relocated to Nanaimo a dozen or more years ago evidently have watched our online services!) We also understand that our friends at Copper Sky “tune in” each Wednesday afternoon at the time we would regularly be holding one of our church services in their entertainment room. God bless ’em!

So, here’s the entire process, from start to finish:

It begins early in the week when Rev. Billy (or more recently, our church administrator, Michelle) crafts the order of service for the upcoming Sunday. That gets electronically passed along to me (Ian Bowden). I then ponder the readings, consult McCausland’s Order of Divine Service, and search the church music archive of my own brain for suitable hymns. (McCausland’s, by the way, lists hymns that are thematically aligned to the scheduled bible readings for each Sunday.)

Once I figure out the hymns for the service, I then need to find the lyrics for them, to be copied into the order of service document. This is not as easy as it would first appear. Despite all of these lyrics being available on the internet with a quick Google search, one quickly learns that most hymns – especially the older ones – have at least a half dozen versions! Not only have edits over the past few hundred years turned “thy” to “your” and “men” to “us” in countless hymns, but entire phrases have also been changed and verses have been added and deleted! Therefore, any hymn I find that’s an exact match to what appears in our hymnal, Common Praise, is a big bonus – and is seldom available. Lots of tedious editing there. The order of service document then goes back to Rev. Billy, who’ll print out a copy to be used on the lectern on Saturday morning when we record the service.

We typically meet at the church at 10am, figure out who’s doing what (e.g. who will read the various bible readings) and then record the service in its entirety – in a single take.

Over the months that we’ve been doing this the gear used to actually do the recording has changed considerably. We’ve used laptops and their built-in webcams, webcams attached to laptops or tablet computers, various microphones that can be connected to computers, etc. Having my primary laptop die in August and need to be sent to China for repairs inserted a large-sized spanner in the works! (I still haven’t got it back, although it appears to be en route.) In those dozens of recordings, a few have failed and required a re-take of the entire service. Sometimes the computer has just turned off during the recording or the microphone wasn’t working as it was supposed to.

Currently, the heart of our “video recording rig” is a video camera purchased on behalf of the church a couple of weeks ago, a device that is more “sound-centric” than your garden variety hand-held camcorder. This one has a built-in stereo microphone and two mic inputs. The inputs allow for us to attach most any microphone that would be used in a PA system. This gives us a tremendous amount of flexibility and the best sound quality possible, without spending thousands of dollars. As we all know, the adoption of new technology comes with a learning curve, often with unintended consequences. Our Advent II recording was found to have terrible sound because of a misconfiguration and needed to be totally redone – the third time this has happened since March.

In an effort to provide a better view of our church altar area in our recordings, we moved our recording rig a few metres into the sanctuary area of the church. That resulted in all of our faces in our Advent I service being totally in shadow! This has been fixed through the addition of some studio lighting, loaned to us by my wife, Jean. (No, she doesn’t use the lighting for video recording, as she’d rather swim through sewage than video record herself! Rather, it’s for archivally photographing artwork she and her friends and clients have produced.)

Think that’s the end of the process? No way! That video doesn’t magically find its way onto YouTube directly from the camcorder.

The penultimate step is done by me, because I have a high-speed internet connection at home (mainly because of the work I do). So, I take the memory card from the camcorder home with me and, on Saturday afternoon, upload the video to Rev. Billy’s YouTube account. He then adds a name, description, and thumbnail title screen to the video listing.

And on Sunday morning, I wake up and go to my basement office and write the post for the website that’ll contain a synopsis of the service and have the links to the order of service document and video that many of you view on Sunday morning or later in the week.

Yes, it’s a labour of love and we’re all so blessed that we have the technology to do this. Thank you for justifying our work by watching each week and for the many kind emails I’ve received from you.