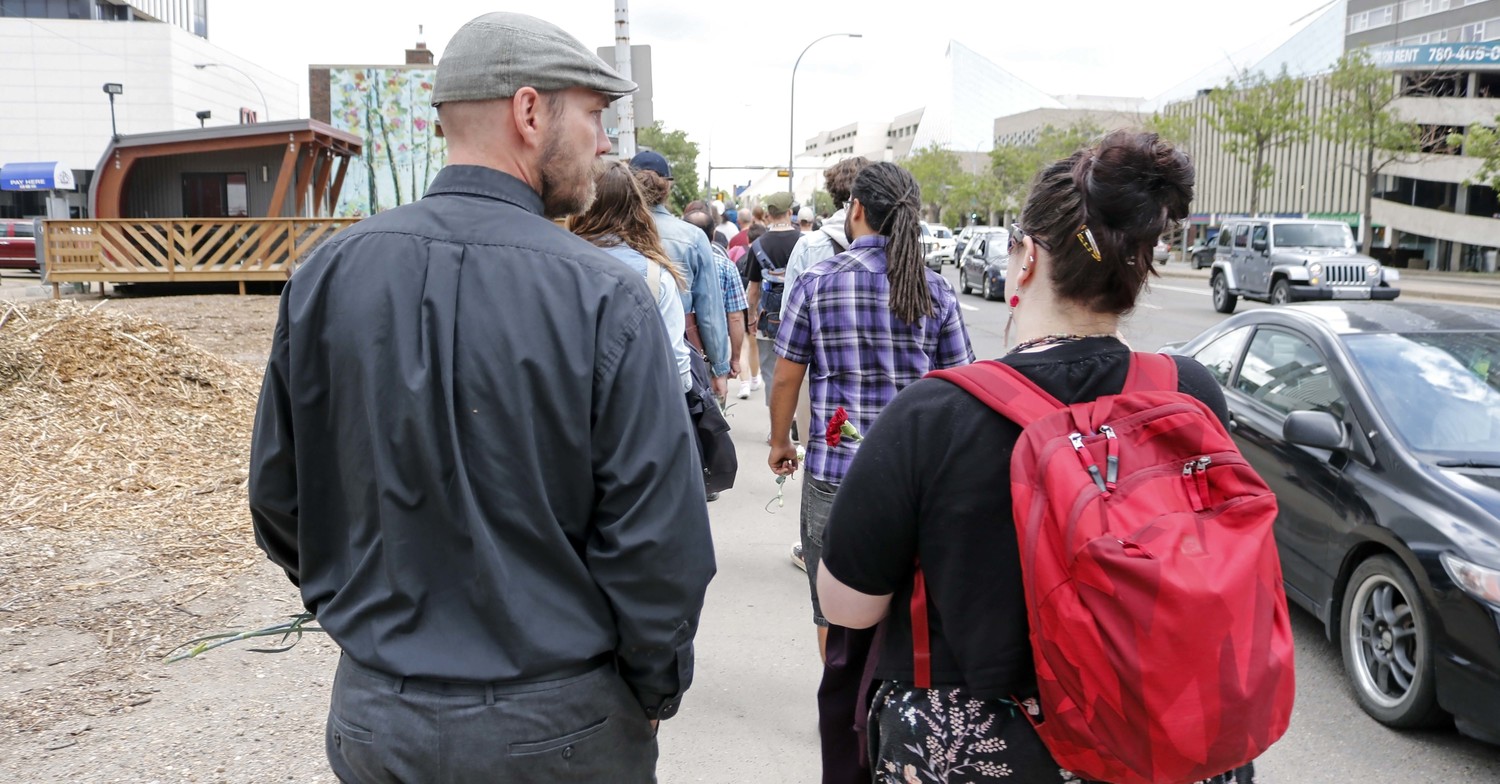 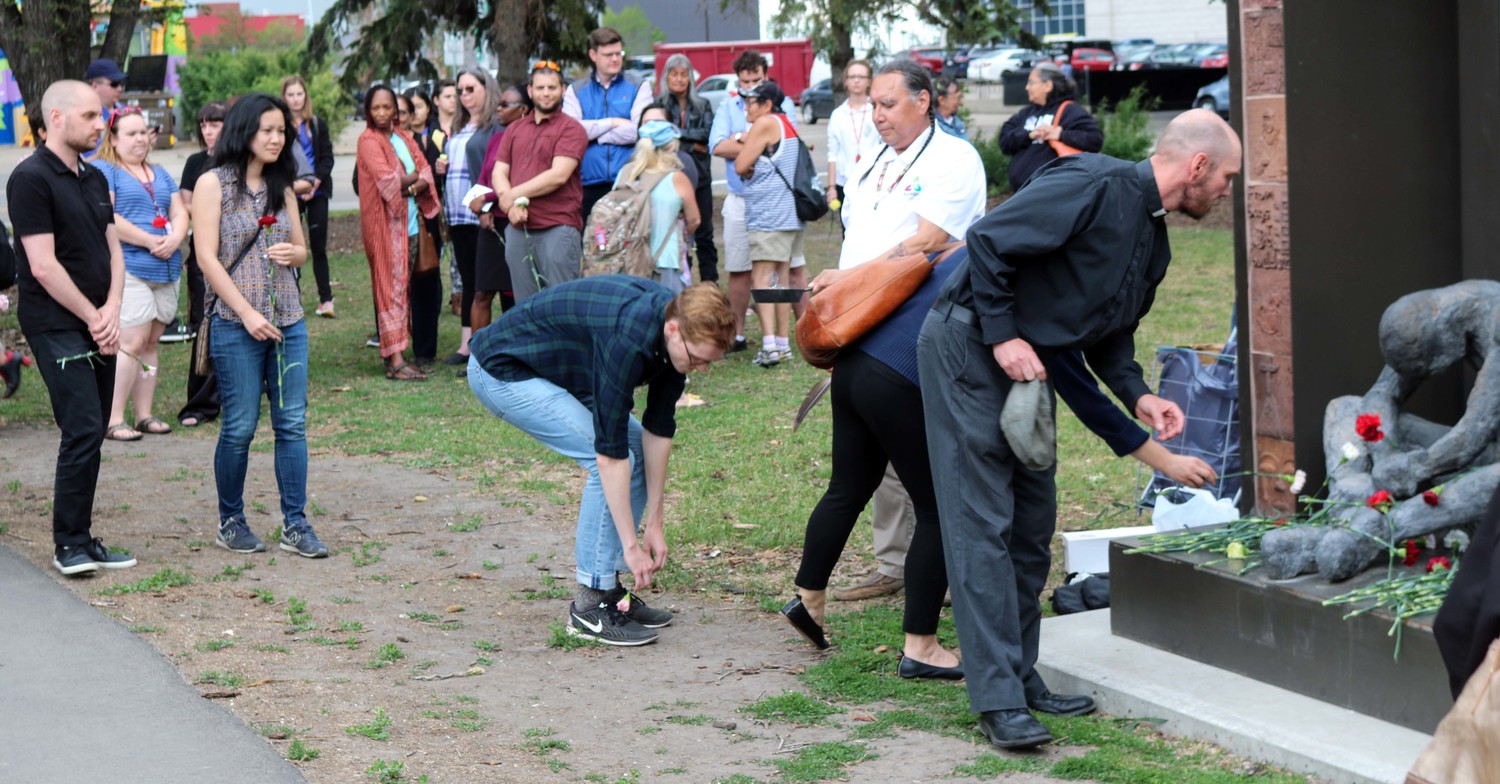 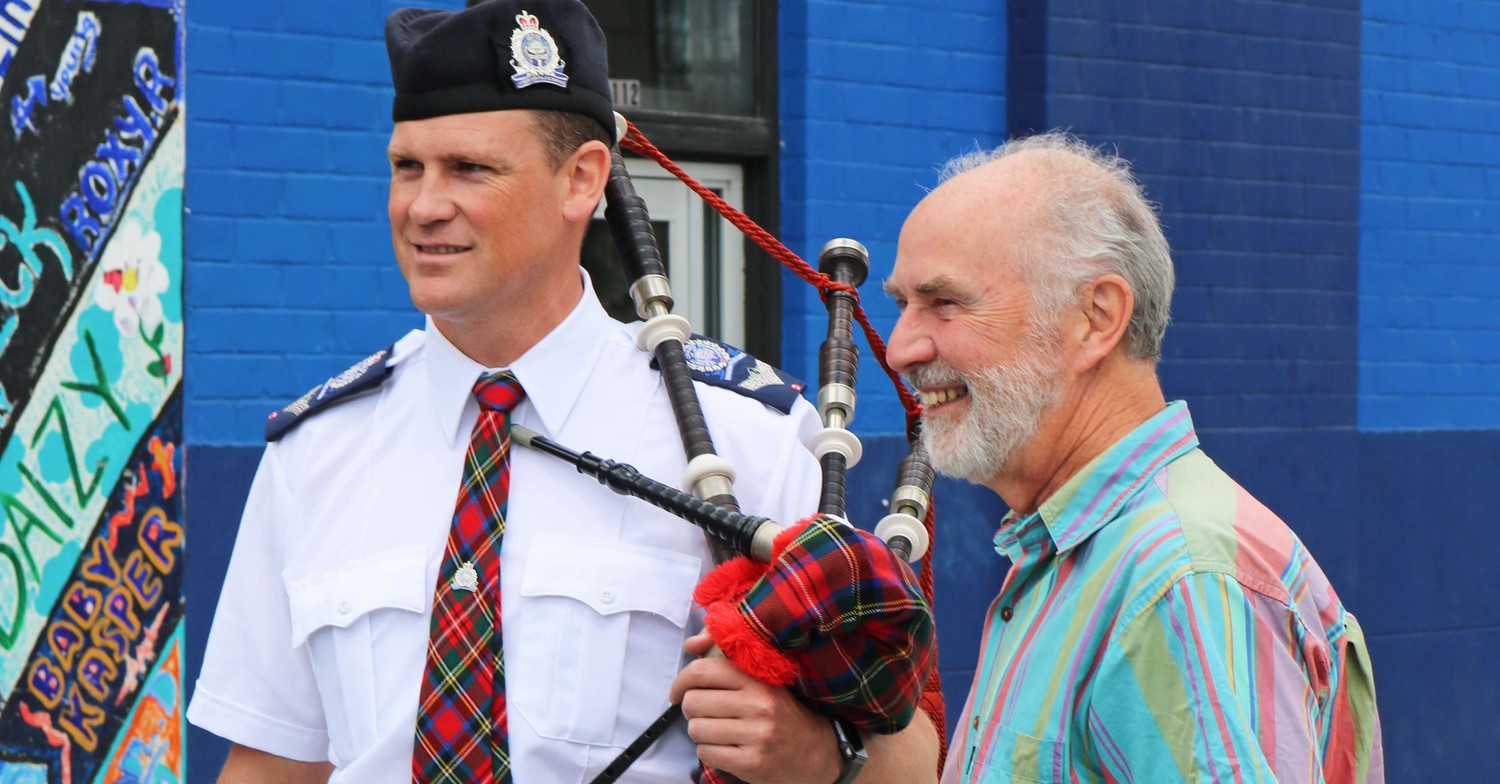 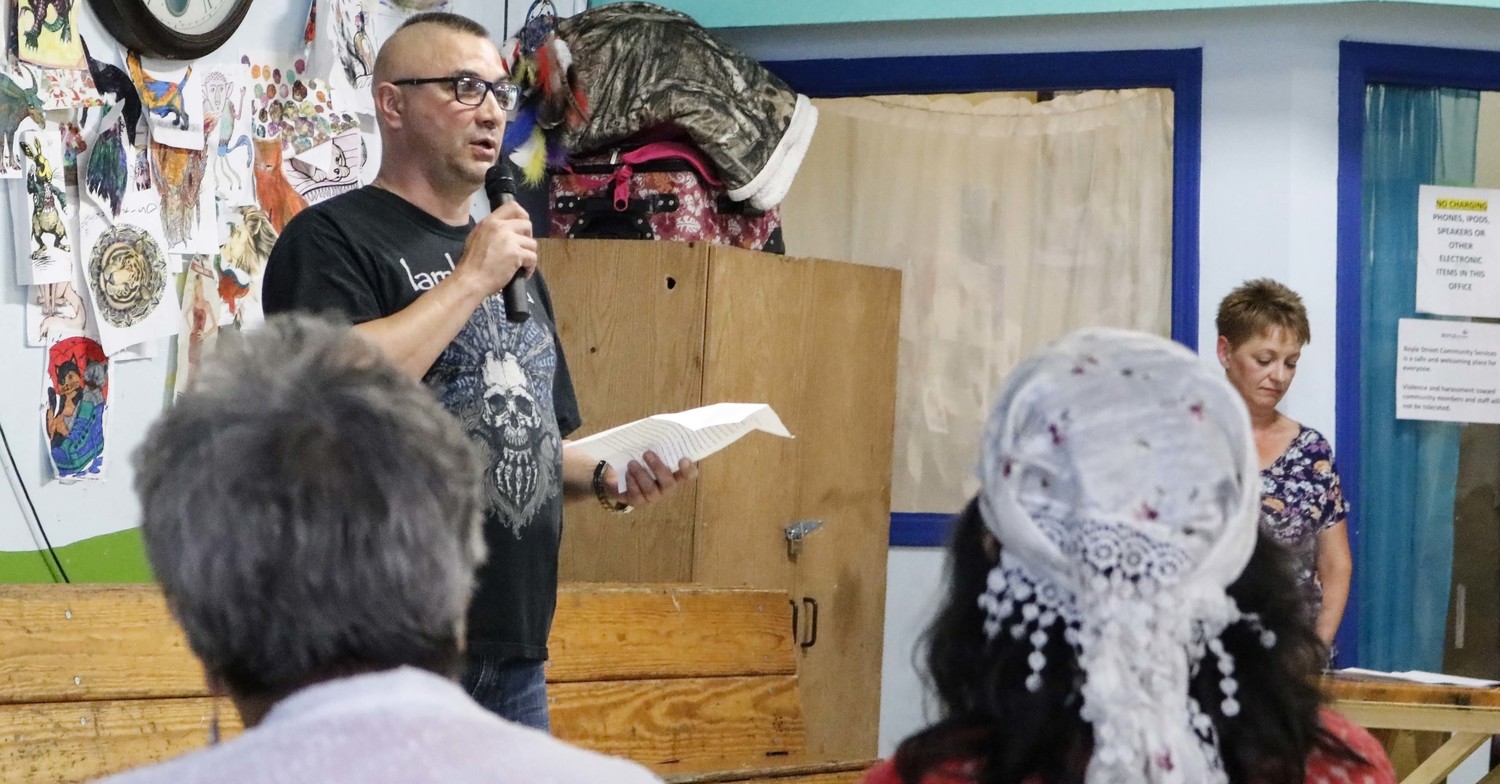 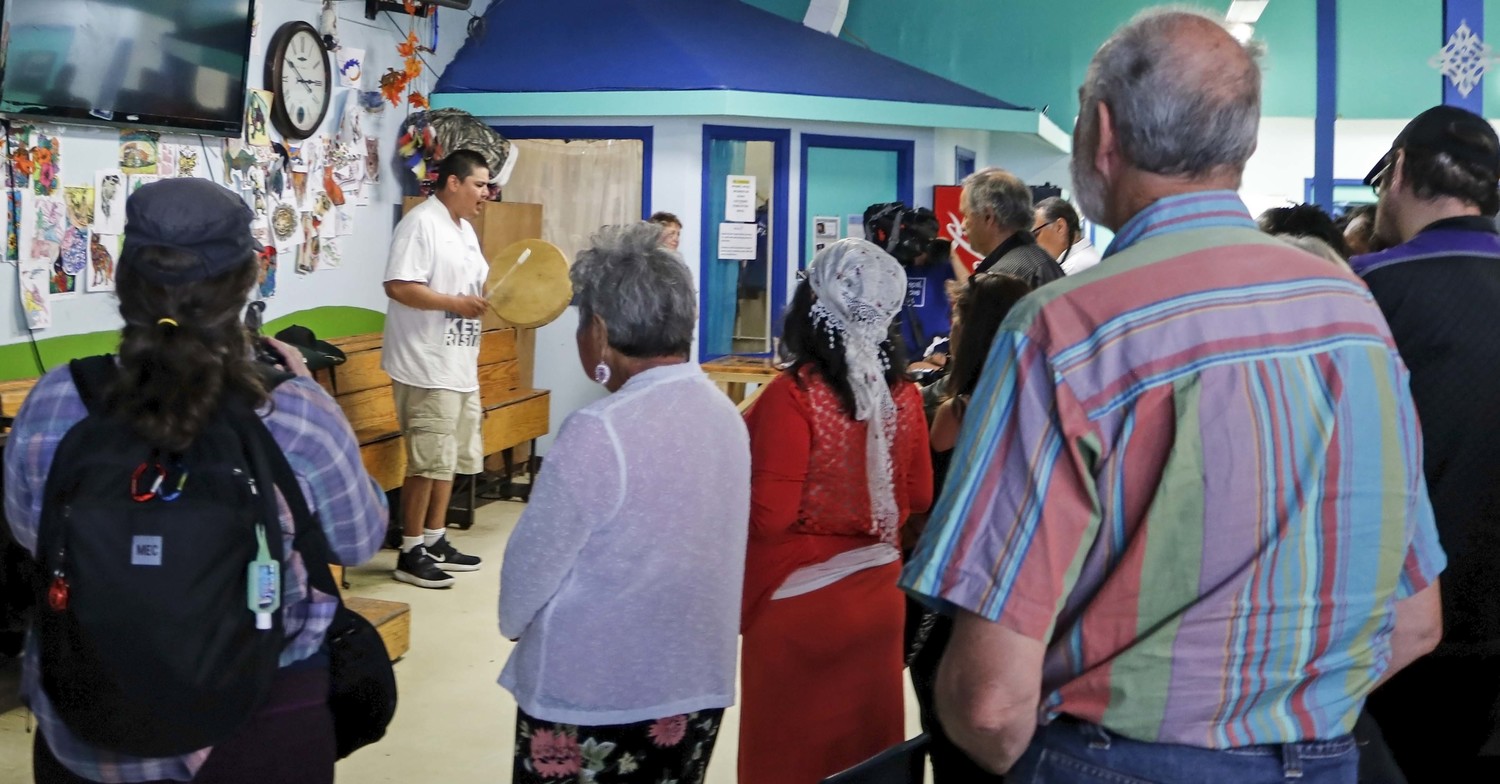 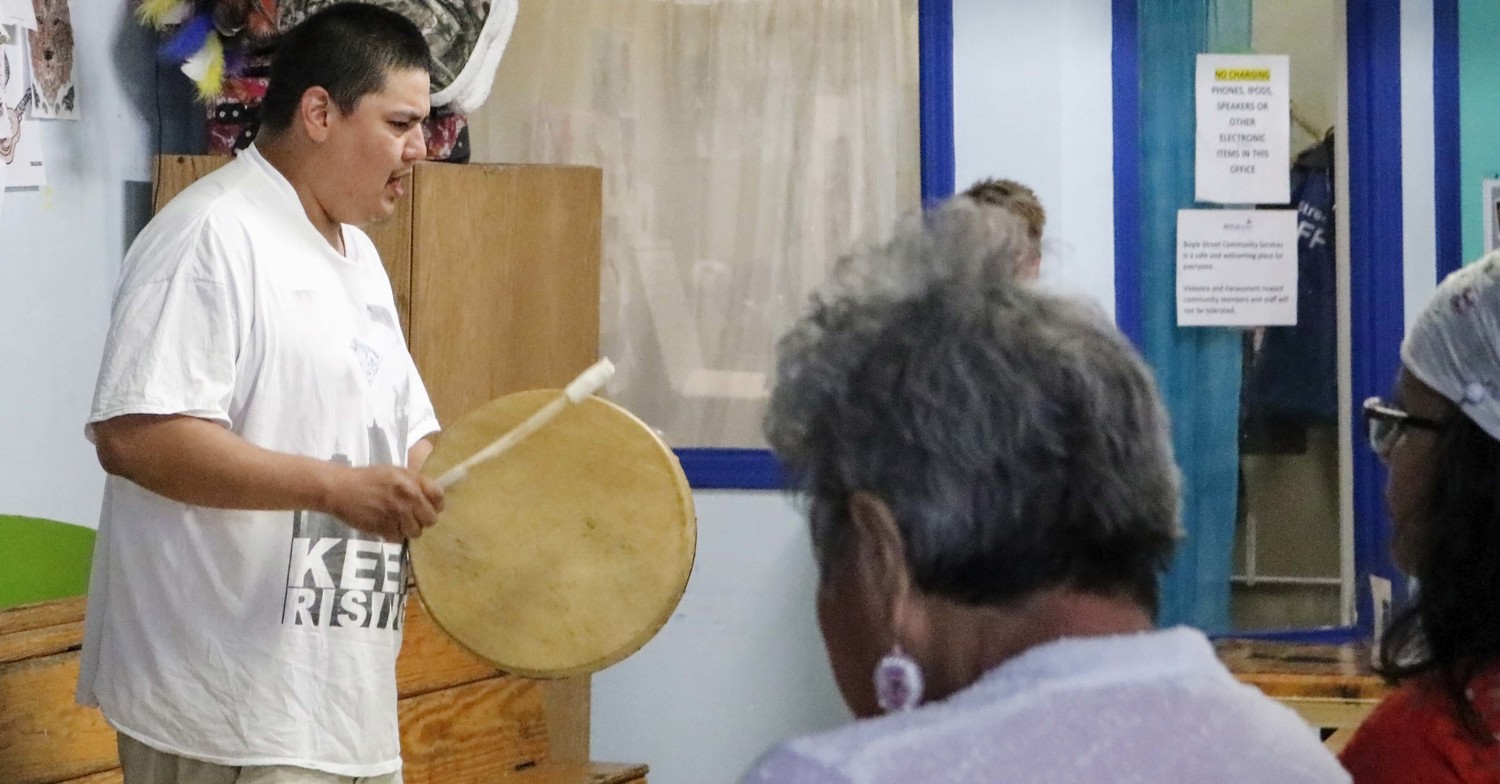 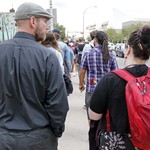 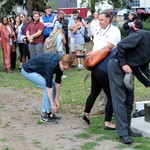 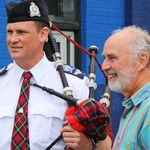 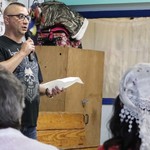 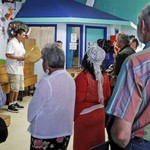 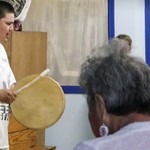 On Friday, June 15, around 100 people gathered at the Boyle Street drop-in centre in the shadow of Roger’s Place for the 2018 Homeless Memorial Walk in honour of 107 Edmonton residents who died last year without a place to call home.

Led by EPS piper Constable Dale McDonald, participants walked together to a small park north of Edmonton City Hall where they were smudged by Gord Holub before laying flowers at the Homeless Memorial.

Jim Gurnett, a board member for the Edmonton Coalition on Housing and Homelessness, started the walk 13 years ago after attending the monthly homeless memorial in Toronto.

“I thought we needed something similar here in Edmonton,” said Gurnett, who also serves as pastoral associate at Inner City Pastoral Ministry (ICPM) and is a member of the Edmonton diocese’s Social Justice and Advocacy Committee.

The total number of identified homeless people who have died since Gurnett started the walk has reached 706.

Thomas McKercher shared his story of recovery at the remembrance celebration. He said that until a few years ago he had been without a home and living on the streets. With the support of a recovery program through the Herb Jamieson Centre, the Hope Mission’s primary shelter for homeless men, he enrolled at Norquest College and has been “clean and sober for 22 months.”

“Norquest never gave me the chance to fail,” he said. “It’s never too late to change.”

Time, however, has not been on the side of McKercher’s friends.

“I’ve lost two friends in the last month,” he said. “One they pulled out of the river, the other was a drug overdose. They were in the recovery program with me, but they left.”

While organizations like Homeward Trust, End Poverty Edmonton and the Capital Region Interfaith Housing Initiative continue to work together to promote the need for housing security for all, Gurnett says more needs to be done to address homelessness and inadequate/overpriced/unsafe housing.

“There is need for about 45,000 units of non-market social and affordable housing, and for nearly 1,000 units of permanent supported housing in the city and this only keeps growing,” he says. “Much of the inadequate supply of existing housing is in poor condition and a lot more money is needed to renovate it.”

Gurnett says it is vital for citizens to advocate with their elected leaders to fund affordable housing.

“There is much faith communities could be doing. The amount of available church land in the city is huge and faith communities should be lobbying City Council to change the zoning bylaws so that housing is an approved use of such lands. This would immediately open up options for partnerships with housing organizations.”

Gurnett says the Homeless Count, conducted annually by Homeward Trust, does not accurately depict “the real extent or seriousness of housing problems.”

The 2016 Homeless Count identified 1,752 people as homeless (findings from the 2018 count have yet to be reported), which was a 24 per cent decrease from two years earlier and a 43 per cent decline from the highest count in 2008.

All three orders of government are working together to boost the affordable housing supply (hundreds of units are currently under construction by major non‐profit housing developers including Capital Region Housing, Greater Edmonton Foundation Seniors Housing, and the Right At Home Housing Society, with hundreds of units more in the planning stage). The City of Edmonton’s Plan to End Homelessness was launched in 2009. In June, 2017 the Alberta government announced it will invest $1.2 billion in affordable housing over the next five years and, in May, the federal government announced that a National Housing Co-Investment Fund (NHCF) under Canada's first-ever National Housing Strategy will create up to 60,000 new affordable units and repair up to 240,000 affordable and community units over the next 10 years. Investments will also support the creation or repair of at least 4,000 shelter spaces for survivors of family violence, the creation of at least 7,000 new affordable units for seniors and 2,400 new affordable units for people with developmental disabilities.

Yet, as of early December 2016, 4,800 Edmonton families were waiting for subsidized rental accommodation (Community of Lendrum Place, 2016). At $1,229 per month average rent for a typical 2‐bedroom apartment, Edmonton still has the fourth highest rents in the country. The city is 23.1% above the national average, and trailing only Vancouver, Montreal and Calgary among major Canadian urban centres (A Profile of Poverty in Edmonton 2017 Update, p. 17).