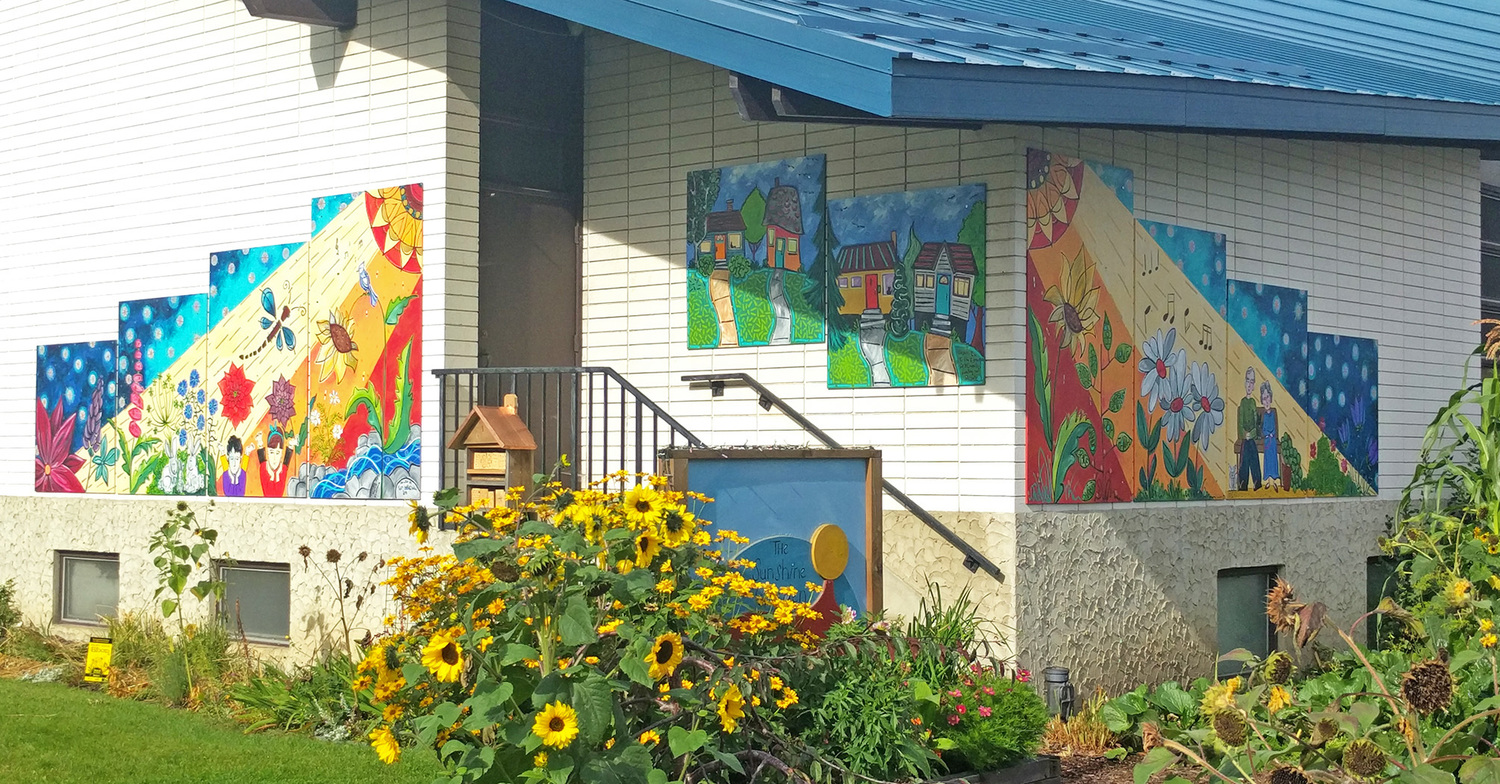 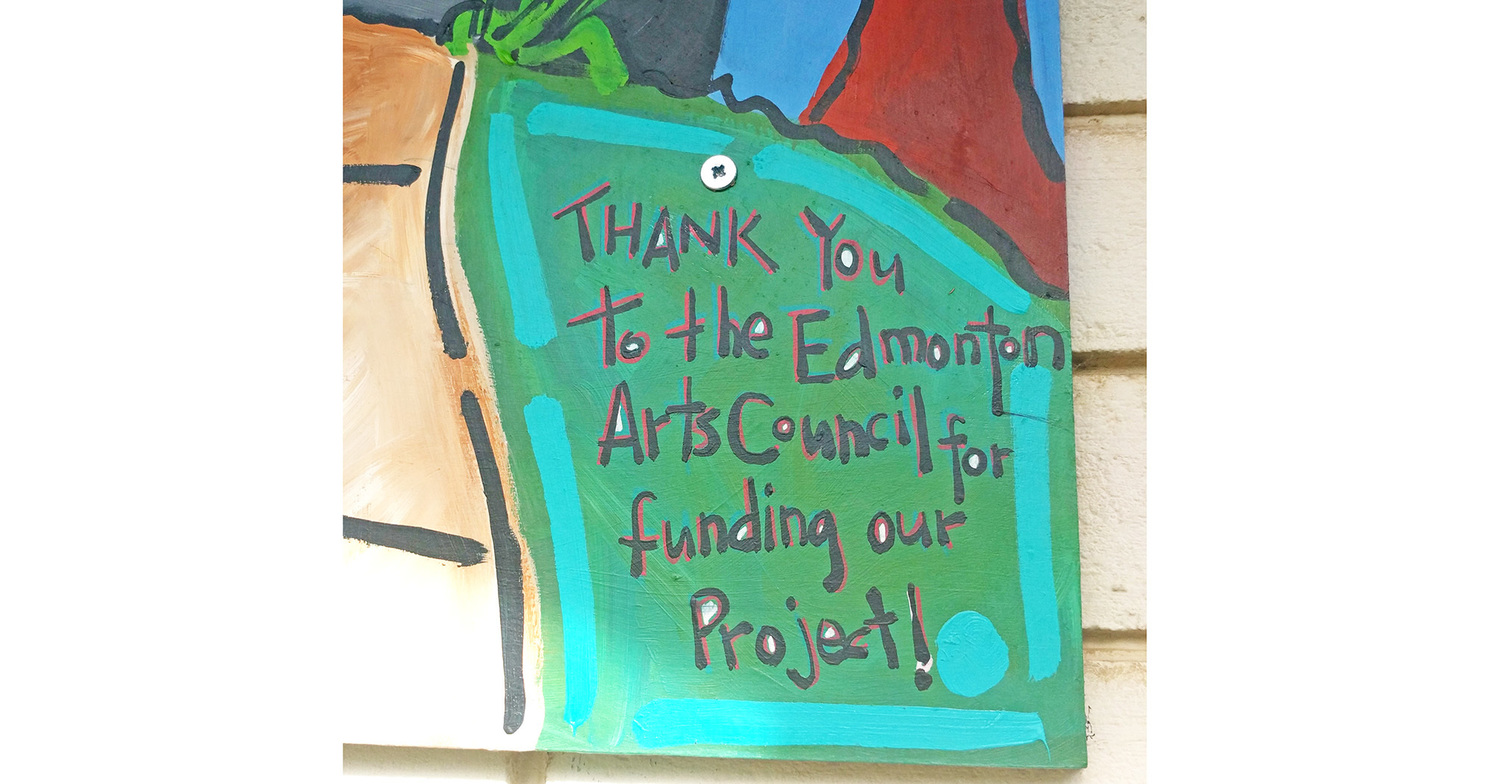 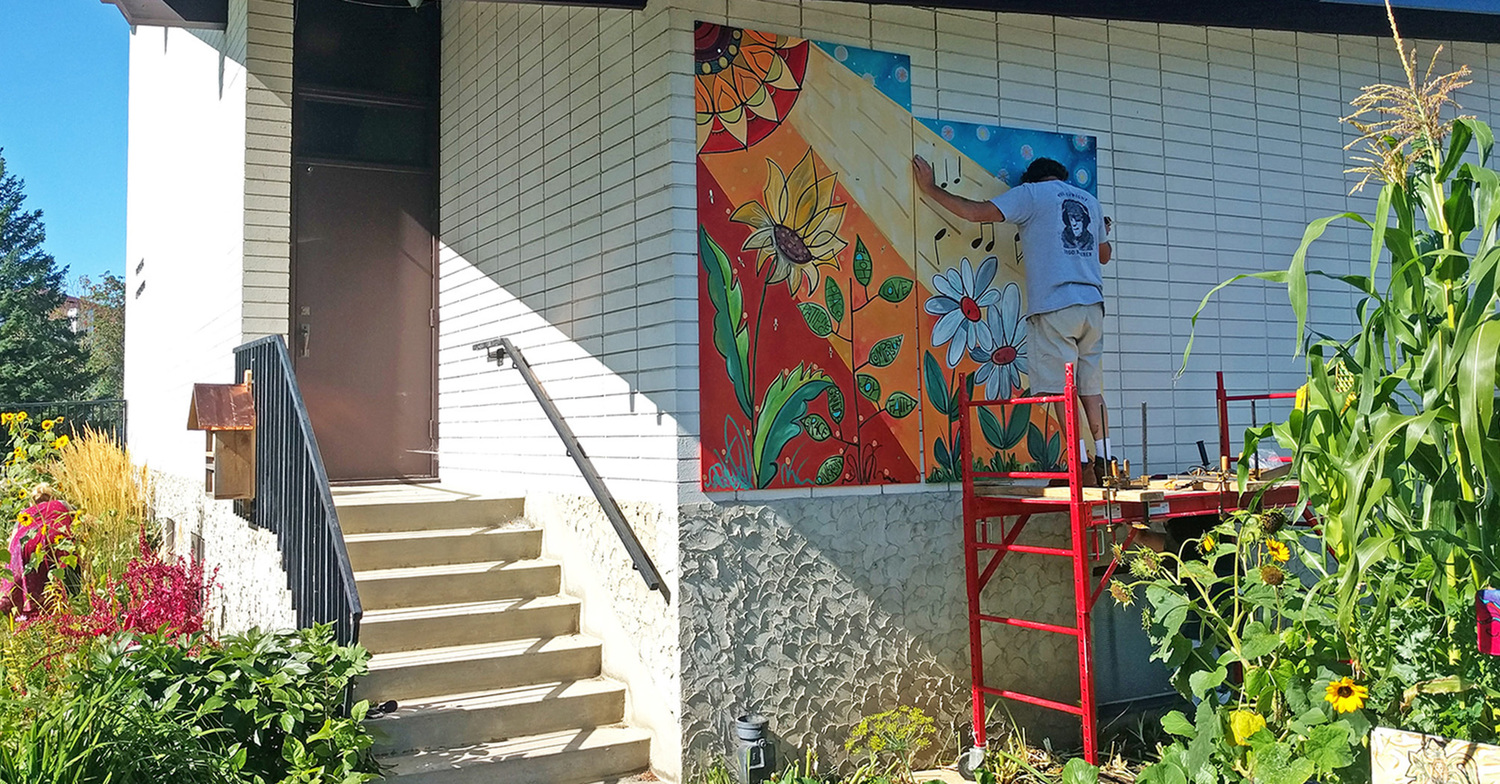 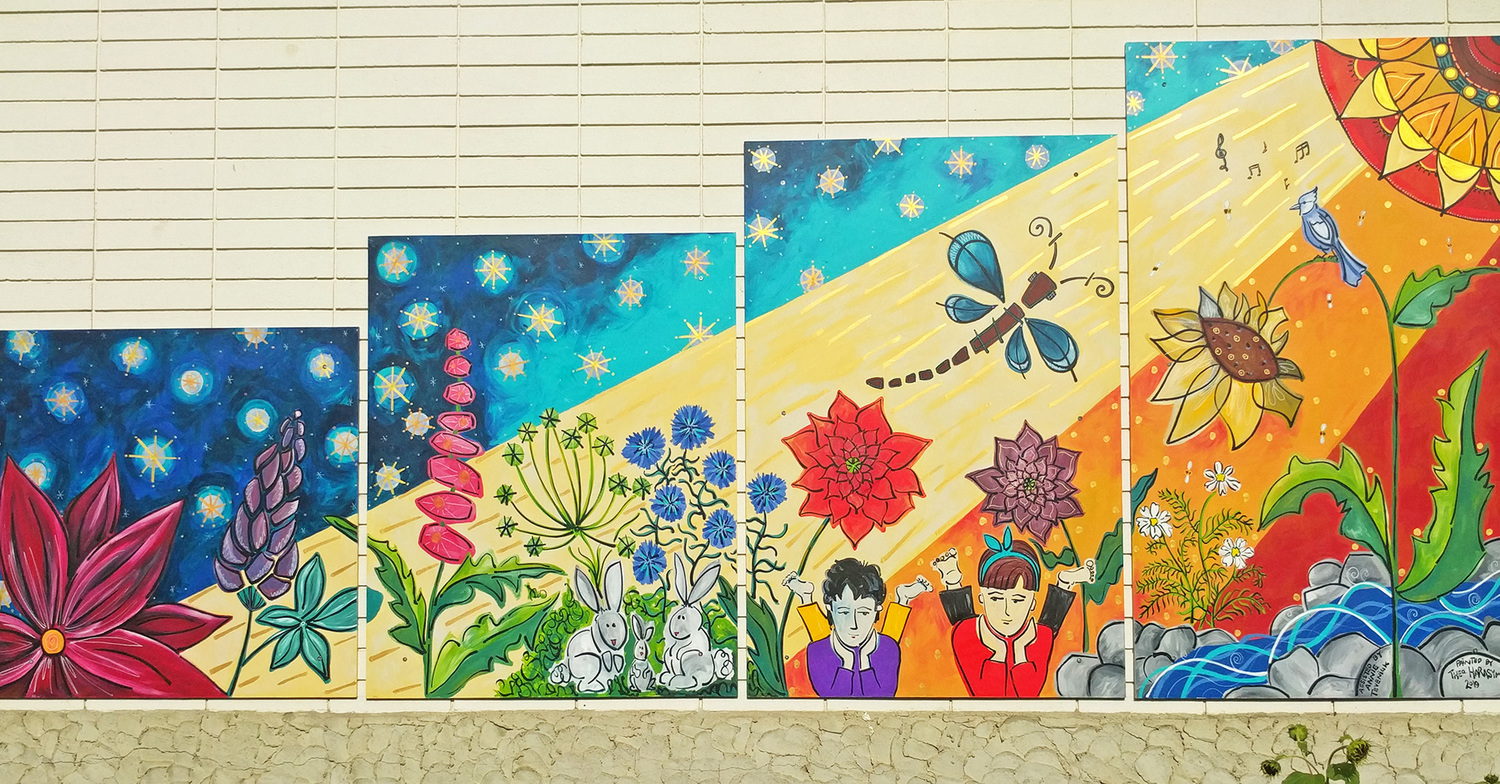 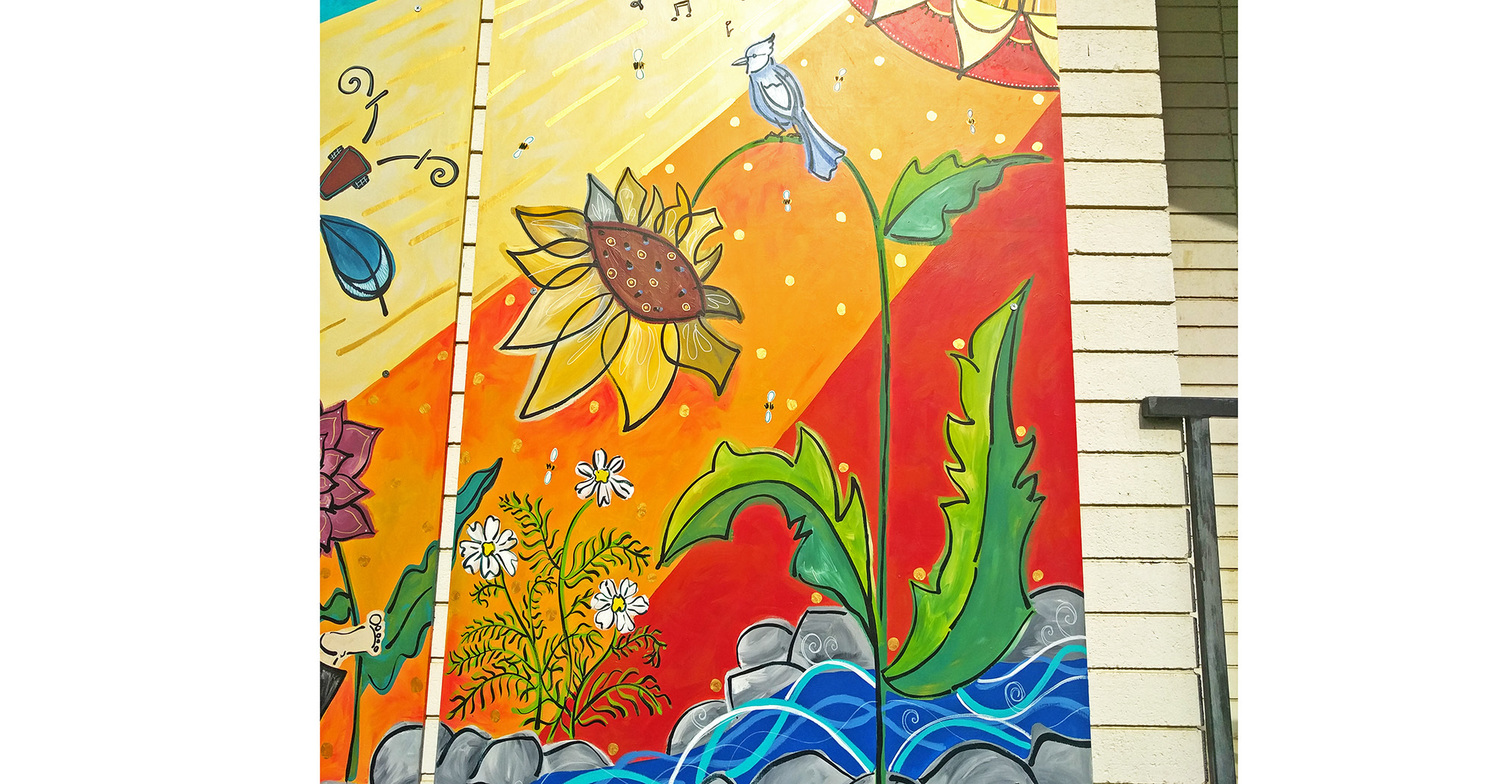 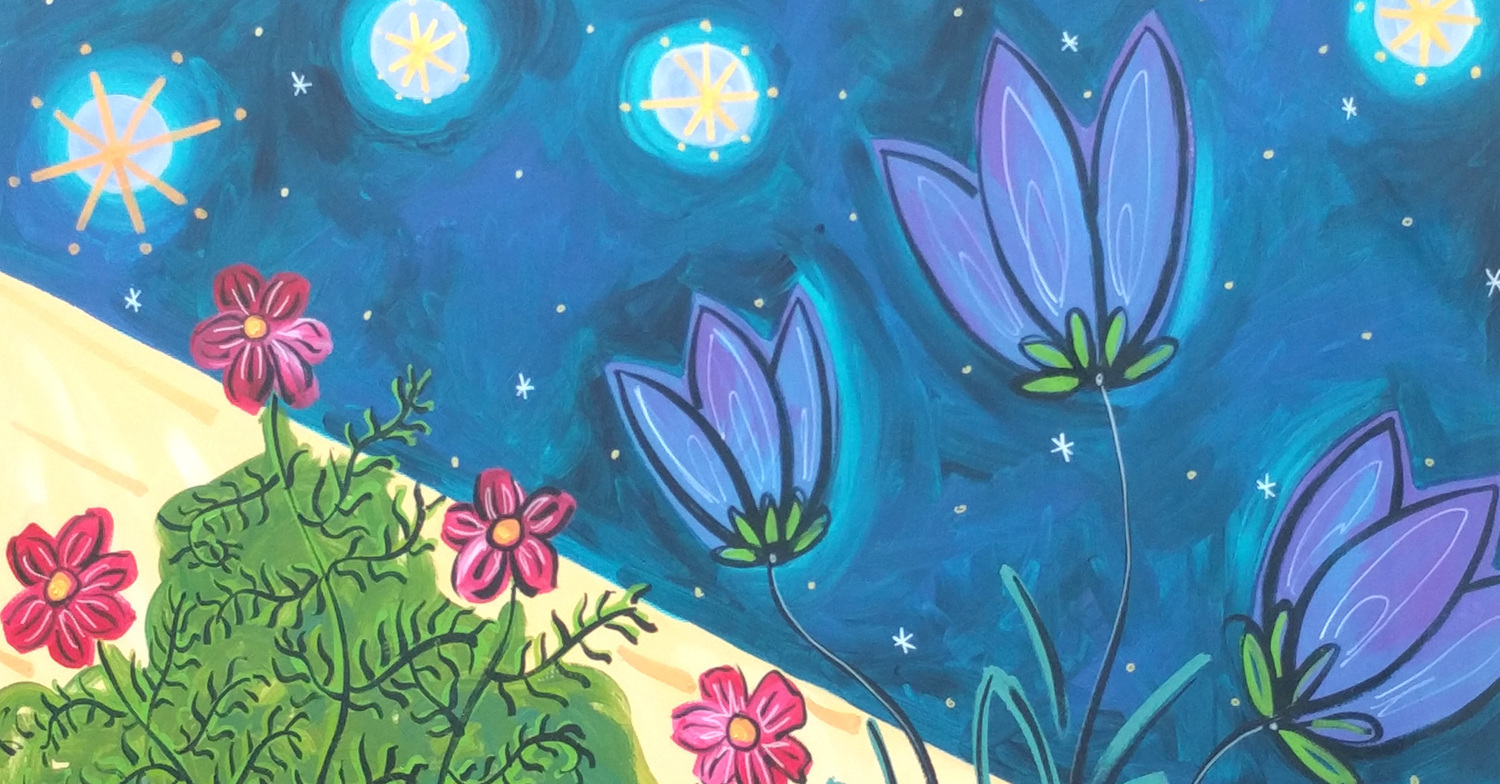 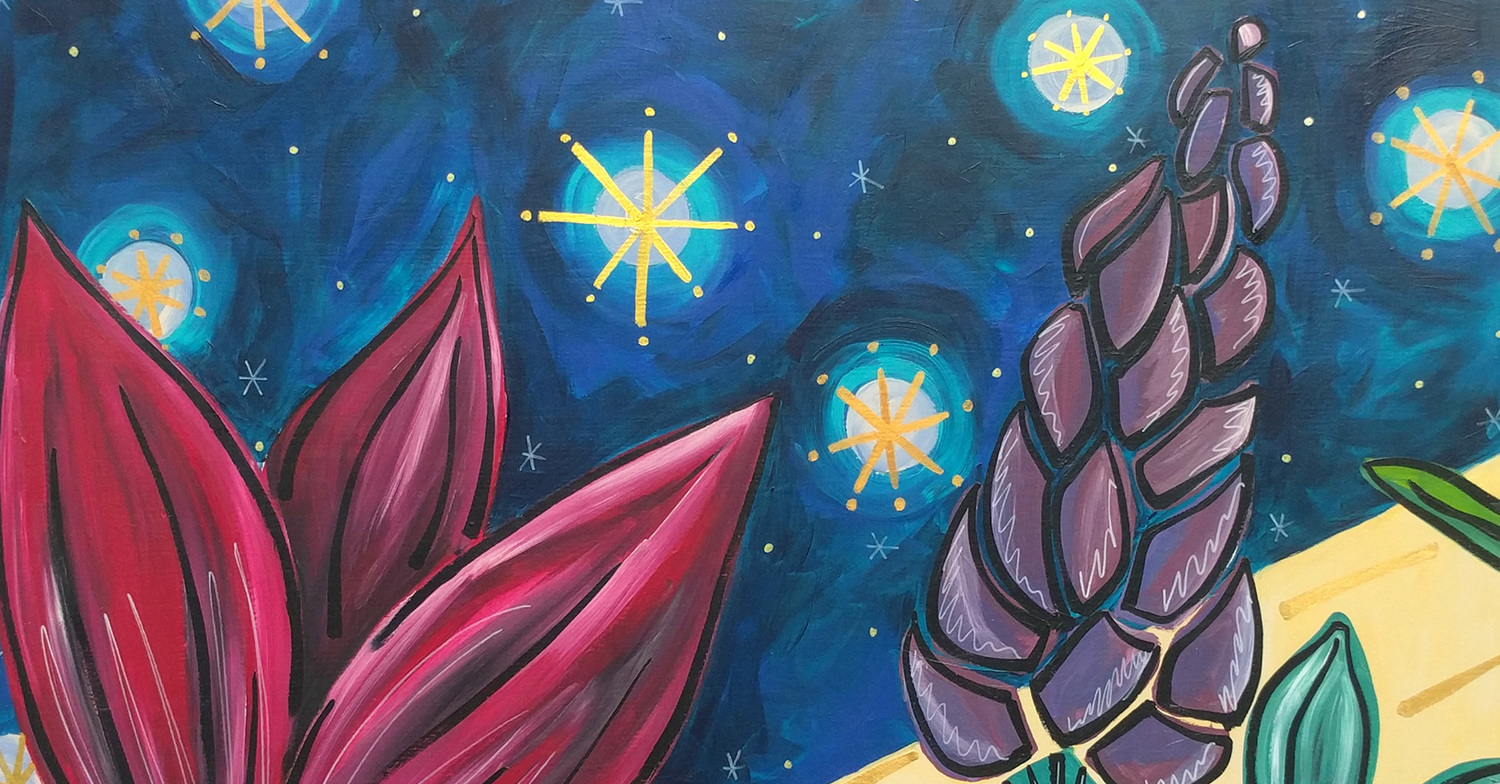 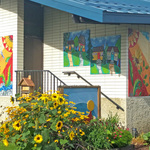 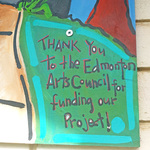 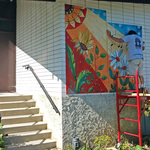 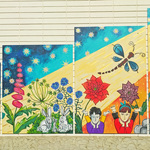 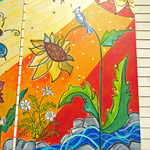 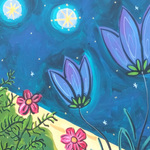 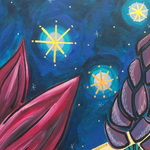 It’s bright, it’s beautiful, and it’s a symbol of church and community working together.

St. Augustine of Canterbury Anglican Church is sporting a new mural on the corner of its building facing 60th Street and Fulton Road, Edmonton. It’s the work of local artist Theo Harasymiw, who has a number of art installations around the city, including a mosaic on the outside of the downtown Italian Centre and more than 90 school projects, the most recent being a series of murals installed last year at Hardisty School.

It was after the school murals went up that the idea for a project at the church began to form and discussions got underway between Harasymiw, St. Augustine's rector, the Rev. Jonathan Crane, and the organizer of the Sunshine Community Garden, Jocelyn Crocker. The church has provided the land for the Sunshine Garden for the past five years, but Crane had been looking for ways to further the connection between the gardeners from the community and members of the church family. Harasymiw lives in the neighbourhood – across the alley, in fact, from a parishioner – and wanted to bring more art to her community. Her typical process is to work collaboratively with a group of people; to invite their drawings, ideas and concepts; then pull them together in murals that can be seen regularly and enjoyed by the participants. That’s the approach she took in Fulton Place, holding two workshops to consult with St. Augustine’s, the Sunshine Garden folks and the wider community through February and March this year. Then they all waited for the funding to come in through a special grant from the City of Edmonton Arts Council, which is offered specifically to an artist working with an existing community group. It couldn’t have been a better fit. The grant covered the costs completely.

Harasymiw then set to work in her local studio, assisted by another artist, Annie Teveniuk, and it all came together for installation on Thursday, September 5.

The colourful pieces depict flowers, birds, and even rabbits that flourish in the Sunshine Garden. And from the church’s input, there are flowers that represent children’s music in the church, as well as a bubbling stream in a rocky bed. The latter is a reminder of a rock waterfall St. Augustine’s has often built inside the church during Lent to show the way God’s grace is always flowing through our lives. There is an older couple on a bench, showing the church as a resting place and a place of connection, and one sunflower with its head down beside another with its head up, representing the church as a place of healing. The backdrop of the mural is the starry cosmos reminding the viewer of the mystery we engage in life.

“A challenge we all have,” he says, “is that people outside the church really have no idea what church is about. So this is a visual way of turning the church inside-out so the community around sees we are about vibrancy, welcome, improving our neighbourhoods, and that we have something to say about beauty and mystery. And practically speaking, it’s been a chance for the church and the garden community to work together on a project to blend the two groups.”

The mural will be officially welcomed with a celebration and blessing later in the fall.